You can package full framework .NET applications from your continuous integration/automated build process with OctoPack. OctoPack adds a custom MSBuild target that hooks into the build process of your solution. When enabled, OctoPack will package your console application projects, Windows Service projects, and ASP.NET web applications when MSBuild runs.

OctoPack should only be installed on projects that you are going to deploy, that means your console application projects, Windows Service projects, and ASP.NET web applications. Do not install OctoPack on unit tests, class libraries, or other supporting projects.

Set the RunOctoPack MSBuild property to true, and OctoPack will create a NuGet package from your build. For example, if you are compiling from the command line, you might use:

After the build completes, you will find a NuGet package in the output directory. This package is ready to be deployed with Octopus. See Package Deployments.

A .nuspec file describes the contents of your NuGet package. You can provide your own simple .nuspec file to your project.

When MSBuild is invoked OctoPack tries to establish the name of your NuSpec file using these rules:

Note: The .nuspec file needs to be in the same directory as your .csproj file.

If you don't provide a NuSpec file, OctoPack will create one by guessing some of the settings from your project.

Here is an example .nuspec file:

If you have an existing .nuspec file but you want the generated Octopus package name to be different from the .nuspec filename, you can use NuGet replacement tokens. For example, the id property in the .nuspec could be set as follows:

Then you would pass the package id you wanted as part of the OctoPackNuGetProperties MSBuild parameter:

Remembering to replace YOUR-PACKAGE-ID with the id for your package.

Include additional files with your NuSpec file

If you need to include additional files, or you want to explicitly control which files are included in the package, you can do so by adding a <files> element to your custom .nuspec file.

If the <files> section exists, by default OctoPack will not attempt to automatically add any extra files to your package, so you need to explicitly list which files you want to include. You can override this behavior with /p:OctoPackEnforceAddingFiles=true which will instruct OctoPack to package a combination of files using its conventions and those defined by your <files> section:

You can use NuGet replacement tokens inside your NuSpec file:

To set a value for these parameters, use the MSBuild property OctoPackNuGetProperties:

OctoPack only packages the files in your .Net applications that are required to deploy the application.

If you have customized the output directory, and you have added a custom files element to your custom nuspec file, the paths you specify must be relative to the nuspec file's location. This means that for the binaries files that are being built by the project you will have to use some combination of ..\ style prefix to refer to the assemblies.

For Windows Service or Console applications, and many Windows Forms or WPF applications, the build output directory contains everything you need to deploy your application.

The example below shows a Windows Service called OctoFX.RateService.exe and all of the files required to run the application, including libraries and configuration files. 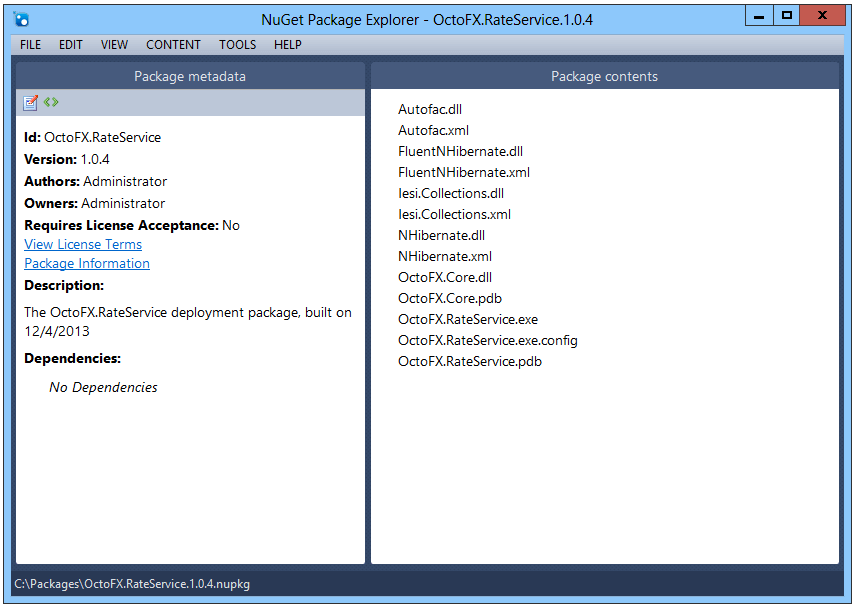 Web applications require additional files to run, such as Razor/ASPX files, configuration files, and assets such as images, CSS, and JavaScript files. OctoPack automatically determines whether a project is a web application or not based on whether it finds a web.config file.

When packaging a web application, OctoPack will automatically include the bin folder and any files configured with Build Action: Content.

You can see Build Action in the Solution Explorer properties window for the currently selected file in Visual Studio: 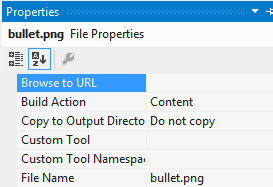 The example below shows a web app called OctoFX.TradingWebsite. All the files required to host the web app have been packaged, including the contents of the bin folder and any files with Build Action: Content: 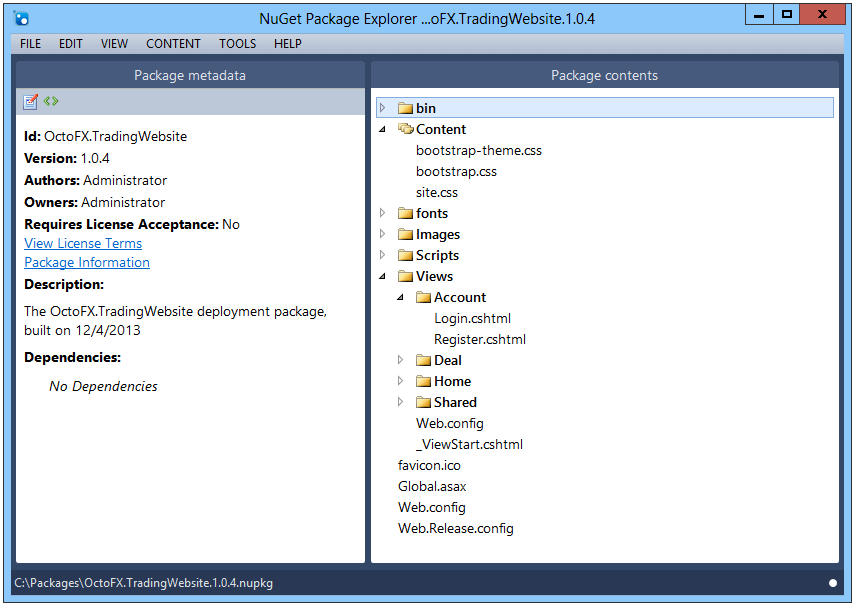 OctoPack won't run web.config transformation files, because these will be run as part of the deployment instead. Make sure you set Build Action: Content for your .NET configuration transform files (like web.Release.config) to ensure these files are packaged and used as part of your deployment.

You can use .NET XML configuration transforms on any XML files including the app.config file for Windows Service, Console, Windows Forms, or WPF applications. Make sure the transform files are copied to the build output directory as part of your build, and they will be packaged by OctoPack so you can use them as part of your deployment.

If you need to include other files in your package for deployment, you can use the Visual Studio properties panel to set the Copy to Output Directory attribute to Copy if newer or Copy always. These files will be copied to the build output directory when the project builds, and subsequently packaged by OctoPack.

During the build, messages are output at the Normal msbuild logging level which may help diagnose version retrieval problems.

NuGet 3 started removing leading zeros and the fourth digit if it is zero. These are affectionately known as "NuGet zero quirks" and can be surprising when working with tooling outside the NuGet ecosystem. We have made a choice to preserve the version as-is when working with Octopus tooling to create packages of any kind. Learn more about versioning in Octopus Deploy.

To make this work for NuGet packages we have forked NuGet.

The packages are available here: https://octopus.myget.org/feed/octopus-dependencies/package/nuget/NuGet.CommandLine

NuSpec files can contain release notes, which show up on the Octopus Deploy release page. OctoPack can add these notes to your NuGet package if you pass a path to a file containing the notes. For example:

Note that the file path should always be relative to the C#/VB project file not the solution file.

To publish your package to a NuGet feed, you can optionally use some extra MSBuild properties:

Push your packages to the Octopus built-in repository

To push your packages to the Octopus built-in repository use the following settings:

When pushing to the built-in Octopus package repository using OctoPack or NuGet.exe, the default URL looks like this:

If a package with the same version already exists, the server will usually reject it with a 400 error. This is because each time you change an application, you should produce a new version of each NuGet package. Usually, customers set up their CI builds to automatically increment the package version number (e.g., 1.1.1, 1.1.2, 1.1.3, and so on).

This will force the Octopus Server to replace the existing NuGet package with the new version you have pushed. It works exactly the same as the check-box on the package upload pane: 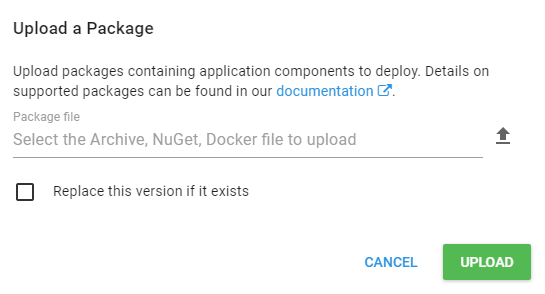 In addition to the common arguments above, OctoPack has a number of other parameters. The full list is documented in the table below.