This guide will walk through rolling back .NET Windows Services and .NET Web Applications hosted on IIS. It will use the OctoFX Sample Application. That application has three components:

For this guide, we will start with the following deployment process for the OctoFX application: 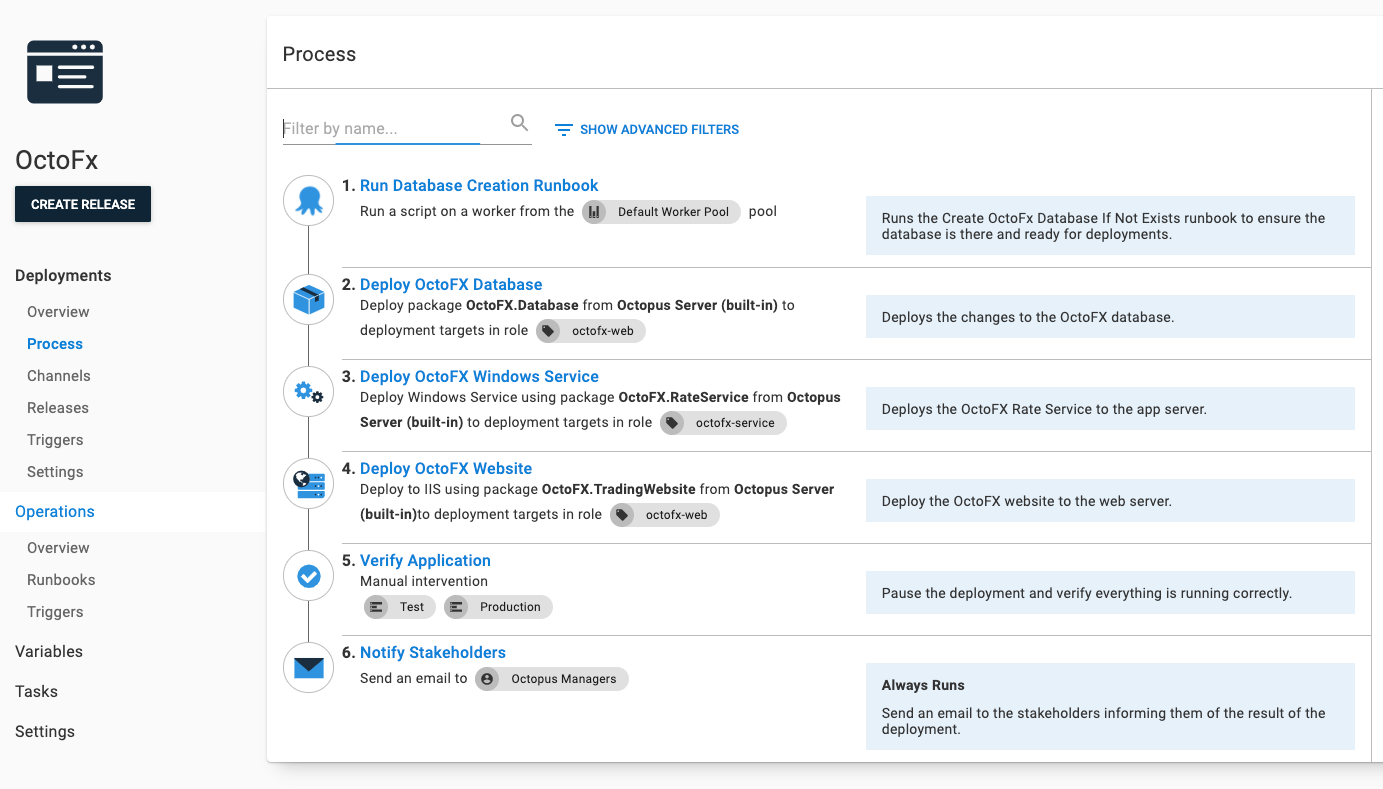 View the deployment process on our samples instance. Please login as a guest.

The easiest way to rollback to a previous version is to:

That redeployment will work because a snapshot is taken when you create a release. The snapshot includes:

Re-deploying the previous release will re-run the deployment process as it existed when that release was created. By default, the deploy package steps (such as deploy to IIS or deploy a Windows Service) will extract to a new folder each time a deployment is run, perform the configuration transforms, and run any scripts embedded in the package.

Zero Configuration Rollbacks should work for most our customers. However, your deployment process might need a bit more fine tuning. The rest of this guide is focused on disabling specific steps during a rollback process.

The typical rollback strategy is to skip specific steps and run additional ones during a rollback. In this example, the database steps will be skipped with another step to prevent that release from progressing will run during a rollback.

The updated deployment process will be: 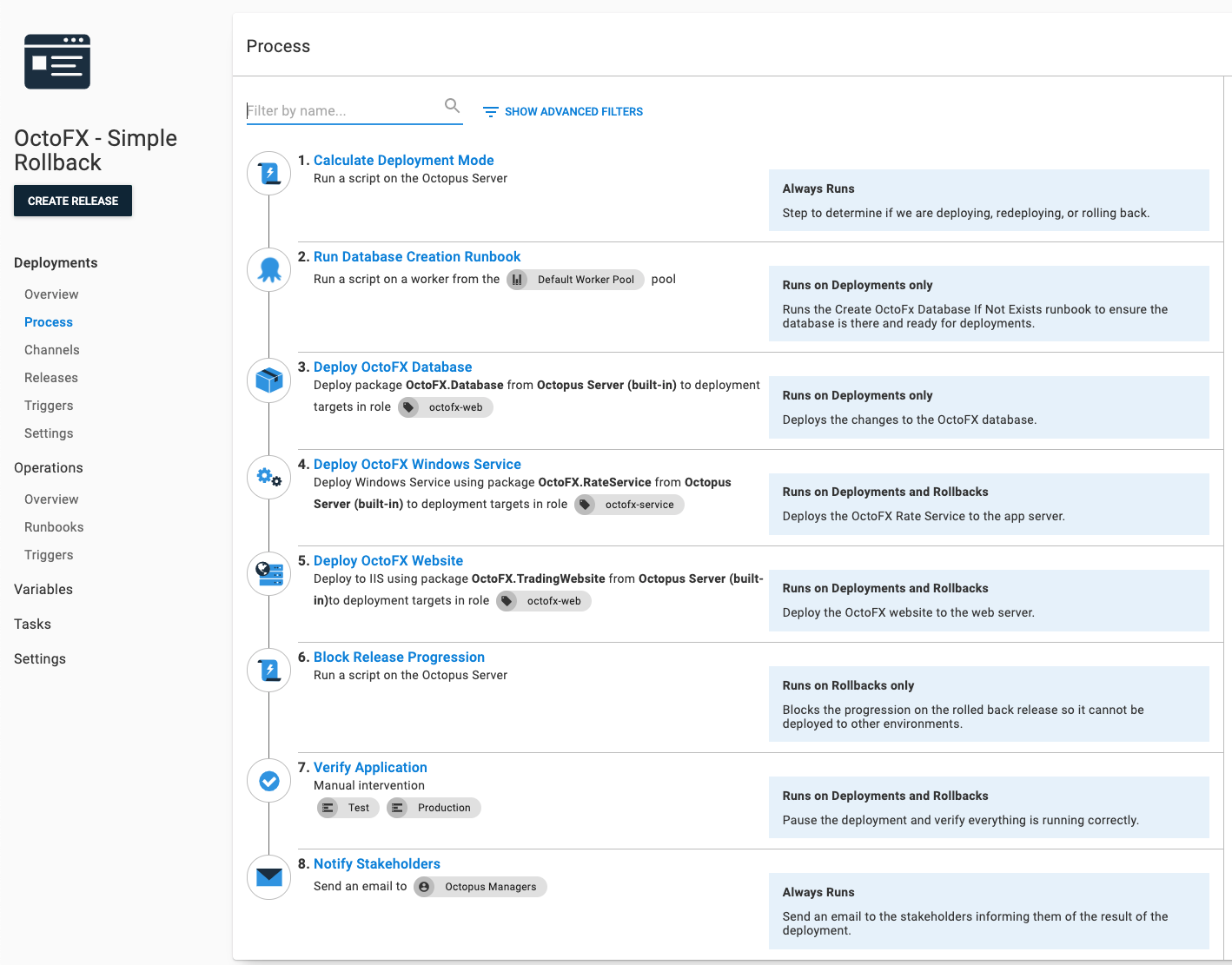 View the deployment process on our samples instance. Please login as a guest.

The two steps related to database deployments, Run Database Creation Runbook and Deploy OctoFX Database, should be skipped during a rollback. Unlike code, databases cannot easily be rolled back without risking data loss. For most rollbacks, you won't have database changes. However, a rollback could accidentally be triggered with a database change. For example, rolling back a change in Test to unblock the QA team. Skipping these steps during the rollback reduces the chance of accidental data loss.

To skip these steps during a rollback, set the variable run condition to be:

We also recommend adding or updating the notes field to indicate it will only run on deployments.

This step includes the following parameters:

This step will only run on a rollback; set the run condition for this step to:

To unblock that release, go to the release page and click the UNBLOCK button.

As mentioned earlier, re-deploying the website and windows service involves re-extracting the package, running configuration transforms, and any embedded scripts. Generally, those steps will finish within 60 seconds. However, re-deploying those packages carries a small amount of risk because variable snapshots can be updated. Or, the embedded scripts are complex and take time to finish.

By default, Octopus Deploy will keep all releases on your Windows Server (this can be changed via retention policies), which means the previously extracted and configured Windows Service or Website already exists. Back in Octopus 3.x we added the system variable Octopus.Action.Package.SkipIfAlreadyInstalled. When that variable is set to True, Octopus Deploy will:

The rollback process in this section will use that functionality to update IIS and the Windows Service registration to point to those older (pre-existing) folders.

The resulting process will be: 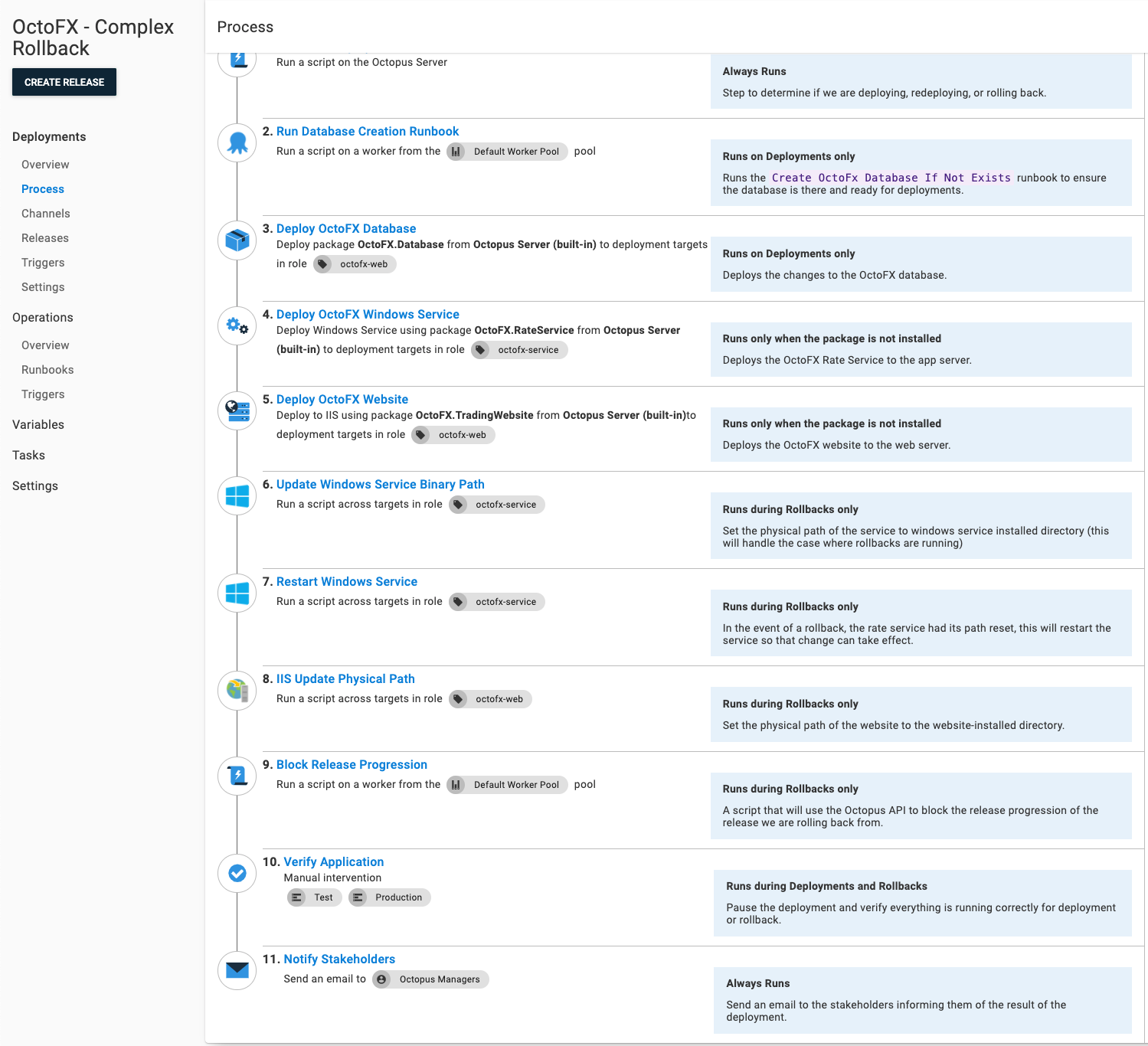 View that deployment process on samples instance. Please login as a guest.

Adding the system variable Octopus.Action.Package.SkipIfAlreadyInstalled will skip already installed packages. That makes a lot of sense for rollbacks but less sense for regular deployments. To only skip package installation for rollbacks, set the variable value to be: 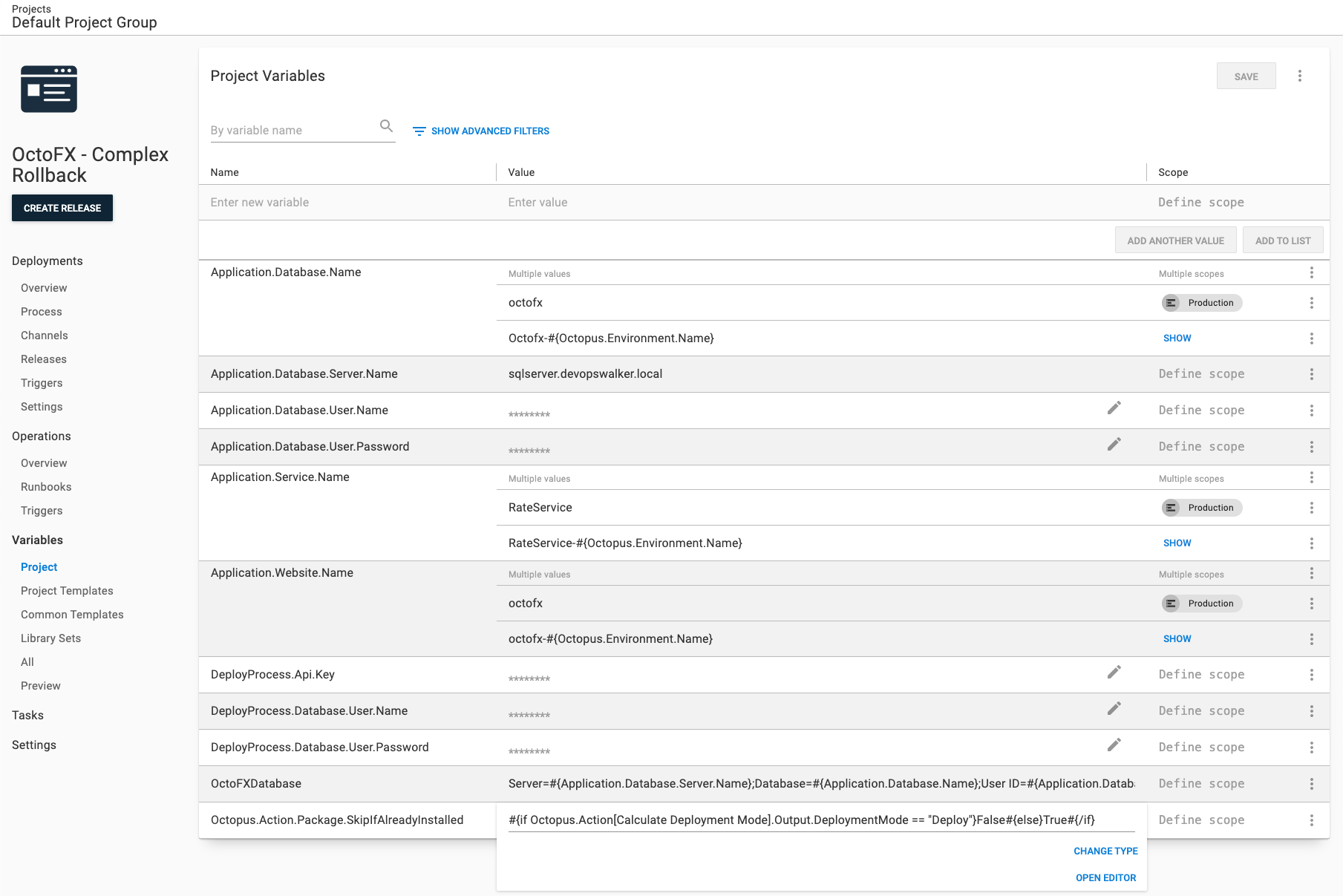 Updating the existing Windows Service to point to an earlier version of the application involves two steps.

The binary path must include the application's .exe file. For example, #{Octopus.Action[STEP NAME].Output.Package.InstallationDirectoryPath}\YOUREXEFILE.exe. For this guide, that value will be:

Set the run condition for this step to:

In modern versions of IIS, updating the physical path is an instantaneous action. All traffic is routed to that new path. To do that, use the IIS Website - Update Property step template.

The parameters to set for this step template are:

Set the run condition for this step to:

If you are using application pools instead of websites, use IIS AppPool - Update Property step template.