TeamCity from JetBrains is a popular continuous integration server that supports a variety of different version control systems and build runners. Octopus Deploy and TeamCity can work together to make automated, continuous delivery easy.

When using Octopus Deploy with TeamCity, TeamCity will usually be responsible for:

Octopus Deploy will take those packages and to push them to development, test, and production environments.

The Octopus TeamCity plugin comes with these custom build runners:

The plugin is simply a wrapper for the Octopus CLI, the Octopus command line tool for creating and deploying releases.

The Octopus Deploy TeamCity plugin is available in the following places:

The TeamCity documentation has instructions and options for installing plugins.

Octopus supports multiple package formats for deploying your software. TeamCity can be configured to monitor your source control and package your applications when changes are made.

You configure TeamCity to package your applications by creating a build configuration, and adding a step to the configuration of runner type, Octopus Deploy: Pack.

With these options selected, your packages will automatically be created using the version number of the current build. OctoPack will ensure these packages appear in the artifacts tab of TeamCity:

Using Octopus as a package repository

Octopus can be used as a NuGet package repository, or it can be configured to use an external feed (such as retrieving them from TeamCity).

To push packages to Octopus during the OctoPack phase, enter the NuGet endpoint URL into the Publish packages to http field, and an API key in the Publish API Key field. OctoPack will then push the packages when the solution is built. You'll find the URL to your repository on the Library ➜ Packages tab in Octopus. Simply click the Show examples link to see options to upload packages including the repository URL.

TeamCity 7 and above can act as a NuGet repository. You can enable this by navigating to Administration ➜ Nuget Settings and enabling the inbuilt NuGet server. Any build artifacts ending with .nupkg will automatically be served as NuGet packages, which Octopus can consume.

Connect Octopus to your TeamCity Server

Once added, the TeamCity feed will appear in the NuGet feed list.

You can use the Test link to make sure that the NuGet package is available before creating your Octopus project.

Tip: delayed package publishing
NuGet packages created from your build won't appear in the TeamCity NuGet feed until after the build fully completes. If you plan to trigger a deployment during a build, this creates a problem: the package won't be in the feed until the build is published, so you won't be able to deploy it.

Creating and pushing packages from TeamCity to Octopus

In version 4.38.0 of the TeamCity Plugin we have added a new build runner that can be used to package your applications as either a NuGet or Zip formatted package. 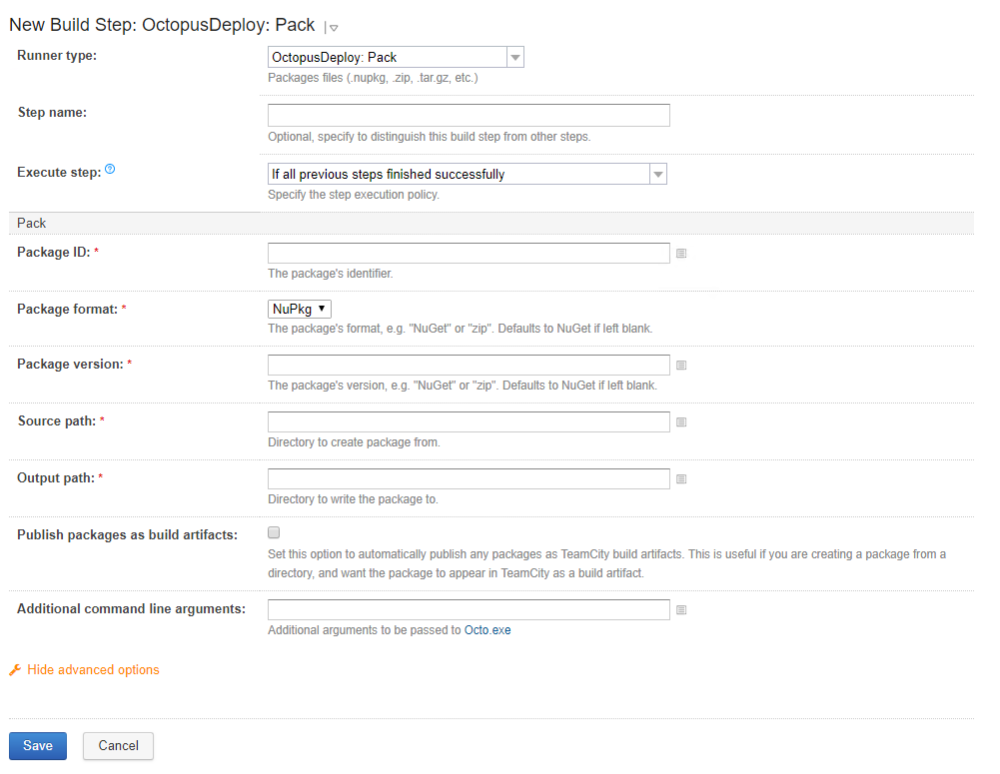 In version 3.3.1 of the TeamCity Plugin we added a new build runner that can be used to package and push your applications from TeamCity to Octopus.

Support for pushing information (metadata) to Octopus about the build has been available in the TeamCity plugin since version 5.1.3. 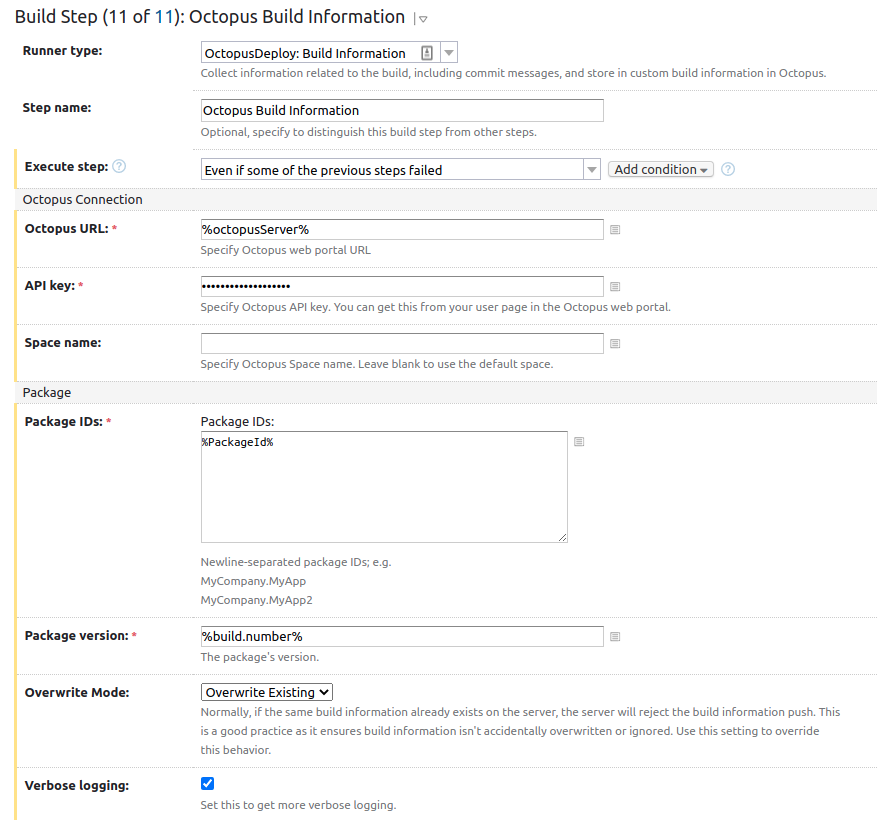 A Branch specification is required on the TeamCity VCS configuration to populate the Branch field for Build Information in Octopus Deploy. For example, +:*

The part of the branch name matched by the asterisk (*) wildcard becomes the short branch name to be displayed in the TeamCity user-level interface. This is also known as the logical branch name and it's this value that is passed to Octopus Deploy by the TeamCity Plugin.

For more information about configuring a branch specification, see the TeamCity - working with feature branches documentation.

Traditionally the Octopus TeamCity plugin required a Windows build agent to work. As of version 4.2.1 it will run on Linux build agents if they meet either of the following requirements: