This page will provide guidelines and recommendations for installing Octopus Deploy on your infrastructure. If you are using Octopus Cloud, please click the button below to move onto the next section in the guide.

The size of your Octopus Deploy instance will be dependent on concurrent tasks (deployments, runbook runs, etc.) and users. A team of 10 people doing five deployments a day will not need the same resources as a division of 500 users doing 600 deployments a day.

This document will refer to tasks; a task can be:

Of that list, Deployments and Runbook Runs are the most common.

High availability functionality may or may not be included in your license. All Server licenses, or Professional/Enterprise licenses sold after 2022 include at least 2 nodes.

High availability works in Octopus Deploy by dropping tasks into a queue. Periodically, each high availability node will check the queue for work. The node will pick up any pending tasks. The nodes have a built-in load balancer algorithm to ensure one node doesn't perform all the work.

Here are some items to consider when installing Octopus Deploy:

Except in extreme cases, you will be processing between 5-10 concurrent tasks for quite some time. There might be one or two times when you go over that limit, but those tasks will queue for a few minutes before being processed. In our experience, most deployments take between 20-30 minutes. With a task cap of 5 to 10, that enables:

Knowing those three items, you can calculate the number of "deployment minutes" required. Deploying 50 applications, each taking 30 minutes during the deployment window, will require 1,500 "deployment minutes." Then we can divide that by the duration of the window, for example, two hours or 120 minutes. 1,500 divided by 120 is 12.5, which is the minimum task cap. That minimum task cap makes a number of assumptions regarding your deployment, namely everything goes perfectly and there are no failures or retries. In this example, a reasonable task cap would be 15 to 20.

A rule of thumb is: When you see more and more tasks being queued, then it's time to add capacity.

Some reference points to consider:

Host Octopus on Windows Server or as a Linux Container

Our recommendation is to host Octopus Deploy Windows Server over the Octopus Server Linux Container unless you are okay with all these conditions:

Due to how Octopus stores the paths to various BLOB data (task logs, artifacts, packages, imports etc.), you cannot run a mix of both Windows Servers, and Octopus Linux containers connected to the same Octopus Deploy instance. A single instance should only be hosted using one method.

We are confident in the Octopus Server Linux Container's reliability and performance. After all, Octopus Cloud runs on the Octopus Linux container in AKS clusters in Azure. But to use the Octopus Server Linux Container in Octopus Cloud, we made some design decisions and create custom workflows due to the above limitations. We restrict the authentication options to Okta, AzureAD, OctopusID, Google Auth and the built-in username and password. Octopus Cloud disables the built-in worker and uses dynamic workers. Finally, we have a process that injects a custom logging configuration to output the server logs to our Seq instance so we can debug any issues.

Below is the default configuration for Octopus Cloud. We've found this provides the resources necessary for 10 concurrent tasks. Anything more, and we have to either increase the container or database resources.

We are currently working with our existing customers on what best practices look like to self-host the Octopus Server Linux Container. If you'd like further recommendations please contact us.

Our recommendation is to configure Octopus Deploy to run in high availability mode from the start, even if you only plan on running one node.

For the remainder of this document, the assumption is you will be using Windows Servers.

A high availability configuration will involve setting up: 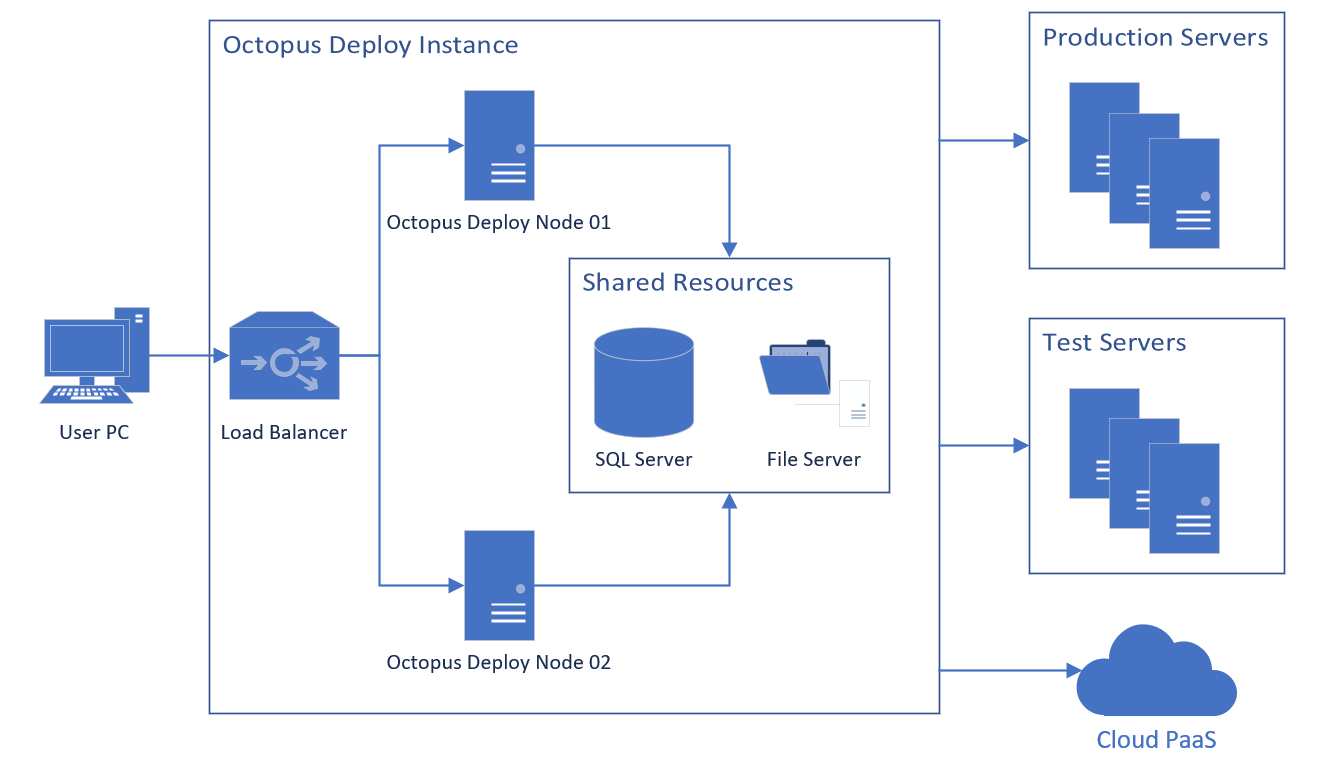 Depending on the number of nodes, that configuration will give you the capacity to process 15-45 concurrent tasks. If you need to scale up quickly, double the compute resources, for example, 4 CPUs / 8 GB of RAM, to get to 30-90 concurrent tasks. We don't recommend going beyond 8 CPUs / 16 GB of RAM and instead recommend scaling horizontally.

Even with a single node, taking the time to configure a load balancer and the separate file storage will ensure your Octopus Deploy instance is more resilient. If the server hosting Octopus Deploy were ever to crash or stop responding, recovery time is measured in minutes, not hours. Having a two-node cluster will result in zero downtime in the event of crashes or regular restarts to update Windows.

Octopus Deploy is a Windows service that will run as Local System by default. If possible, run that service using a specific Active Directory or Azure Active Directory account. Use integrated security instead for the database instead of providing a username and password.

For the database, we will typically see customers who already have a very powerful production SQL Server 2016+ Server, Azure SQL Database, or AWS RDS SQL Server monitored by DBAs already running. If that server has plenty of capacity, then we recommend re-using that.

But, if you need to stand up a new server, that is more than okay. Our recommendations are

If you are going to run SQL Server Standard or Enterprise, configure either a failover cluster instance or an availability group to ensure database resiliency.

Keep an eye on your database resources as you increase the number of concurrent tasks and users. You should perform routine SQL Server maintenance periodically to maintain performance, including rebuilding indexes, regenerating stats, and regular backups.

To ensure high performance, the SQL Server and the servers hosting Octopus Deploy must be in the same data center or region to keep latency to a minimum.

By default, the number of concurrent tasks for each Octopus Deploy node is 5. Increase that to 10 using this guide. We don't recommend going beyond 40-60, even if the node has the necessary compute resources.

As stated earlier, each node will pick up tasks until it reaches its task cap or it runs out of pending tasks to pick up. Octopus has a load balancing algorithm in place to ensure one node in an HA cluster doesn't process all the pending tasks. The algorithm will do its best to keep the load even, but outside factors, such as duration of task, the kind of task, etc., could result in one node seemingly doing more work than others.

Setting the task cap to 0 will mean that node picks up no tasks. It will only host web requests for the Octopus Deploy UI.

The Octopus Deploy UI is a stateless React single page application that leverages a RESTful API for its data. Any standard load balancer, be it F5, Netscaler, or provided via a cloud provider, will work. If you need a small load balancer, NGINX will provide all the functionality you'll need.

The recommendations for load balancers are:

Octopus Deploy will return the name of the node in the Octopus-Node response header.

We have noticed specific user actions, such as creating a new space or updating permissions, won't update the cache on all nodes, and you'll get odd permissions errors. Typically the cache is updated after a few minutes, and those errors go away. If that happens to you, look at the Octopus-Node header to determine which node has updated data vs. not updated. If you see that jumping between nodes is the problem, and you update permissions a lot, we recommend switching over to sticky sessions.

If you plan on having external polling Tentacles connect to your instance through a load balancer / firewall you will need to configure passthrough ports to each node. Our high availability guides provide steps on how to do this.

Octopus Deploy stores BLOB items such as task logs (generated during deployments), deployment artifacts, packages, project images on a file share instead of in the database.

The kind of file storage will depend on where you are hosting Octopus Deploy.

You can use the same /api/octopusservernodes/ping to monitor service uptime. Any monitoring tool that allows you to make HTTP calls to test health will work. Internally we use the tool Better Uptime to track Octopus Deploy status and alert us when it is down.

The above recommendation is designed for people working in small to medium-sized companies or people working in large companies getting started with Octopus, perhaps during an initial pilot of 4-7 teams. The recommendation below is for a large Octopus Deploy configuration designed to handle close to 1000 deployments a day. If you follow the advice in the small-medium scale configuration section, it will be easy to scale up to this as all the necessary infrastructure; load balancer, file storage, and SQL Server, will be in place.

We don't recommend starting with this unless you plan to onboard dozens of teams quickly or you have a lengthy approval process. 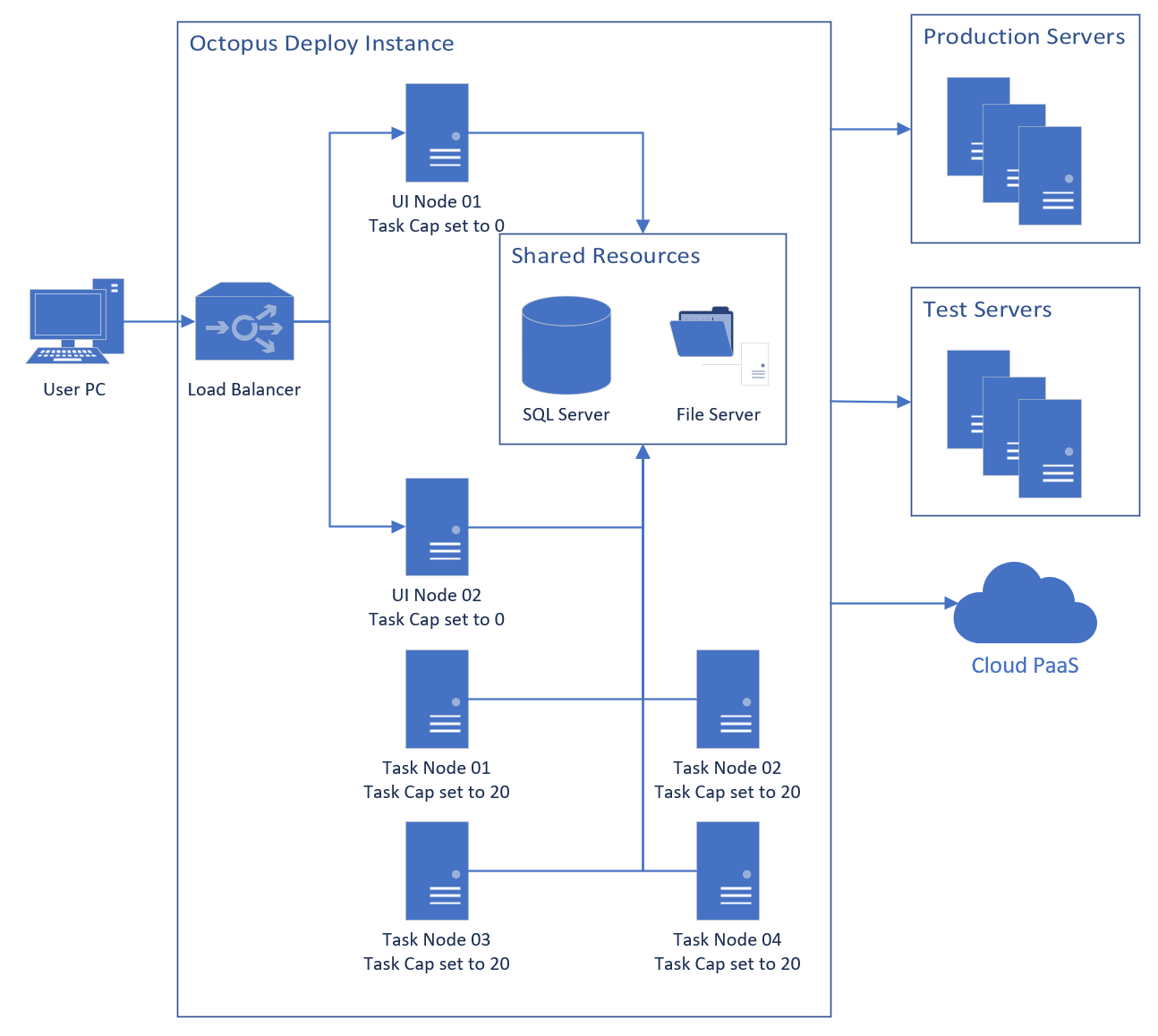 The configuration above is a baseline. We recommend monitoring your resources as you add projects, users and do more deployments and runbook runs. The more data, the more Octopus UI and database have to process. Experiment with increasing compute resources for the SQL Server and the UI nodes. If you run into any performance concerns, please contact support.

This configuration will provide 120 concurrent deployments, with the capacity to quickly increase to 160. The two UI-only nodes will enable users to interact with Octopus Deploy without consuming compute resources needed to orchestrate deployments. If you need to process more than 160 concurrent tasks, first increase the compute resources on the task-only nodes and database server. Once you reach 16 Cores / 64 GB of RAM it is time to start adding nodes.

High availability allows you to add multiple nodes to your Octopus Deploy instance. That, in turn, opens up additional questions about how to manage those nodes.

Each node should update the OctopusServerNodes table in the database once a minute. This tells the other nodes it is still alive and can continue to process tasks.

Once high availability is configured, the steps to add a new Windows server node are:

To add a new Linux Docker image node, the steps are:

Assuming the node is configured to process tasks, it should start picking up tasks to process within a few minutes.

Occasionally, you'll want to delete a node. Perhaps you added two, three, or four nodes in anticipation of a large project involving hundreds of deployments, and now it is time to scale back down.

To do that, you'll want to follow these steps:

Any task associated with the node will fail if you don't wait for the node to finish draining and wrapping up any active tasks.

It is possible to use auto-scaling technology to add/remove high availability nodes. Adding a node is a lot easier than removing a node; assuming all the file shares are mounted, and the node can see the database, the node will come online and pick up work.

Removing the node will require a bit more planning. When the node is deleted by the auto-scaling technology, any tasks in process will fail. If you are in AWS or Azure, you can use a Lambda or Azure Function to:

If you are hosting Octopus Deploy on a Windows server, you will need to install regular Windows patches. To do that, follow these steps:

If you chose this instance configuration, you would need a process to:

Using the Octopus Deploy API, all of that is possible; however, it will require diligence and maintenance on your part. Unless there is a specific business requirement, such as security team requirements or regulatory requirements, we don't recommend taking that on.

For further reading on installation requirements and guidelines for Octopus Deploy please see: