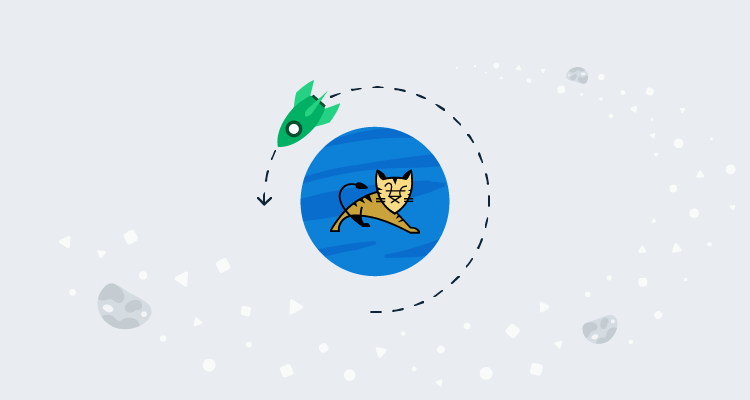 The DevOps feedback loop usually has automated processes to capture issues as early in the pipeline as possible. While these automated processes allow for early detection, bugs can still find their way into production code. Some bugs are severe enough to warrant backing out of the recently deployed version. The process of reverting changes is called a rollback.

In this post, I discuss different rollback strategies when using an Apache Tomcat web server.

You can also read about: 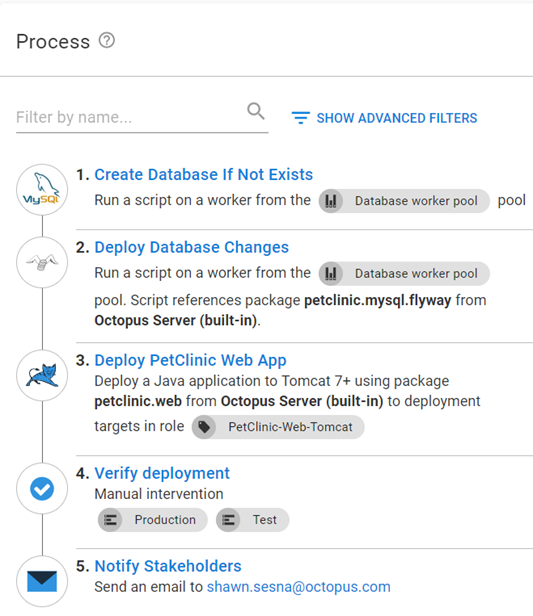 This post assumes you're familiar with the steps included in this deployment process and won't go into detail for each step.

All steps in the deployment process are executed as they were configured when the release was created. For Apache Tomcat, the package will be re-extracted on the Tomcat server, a variable substitution performed, and it will be repackaged before being sent to the Tomcat Manager for deployment. The size of the package will determine how long it takes.

As mentioned, all steps in the deployment process will be re-executed as they were the first time. While the built-in method of redeployment is effective, there may be steps you don't want executed when performing a rollback.

You usually roll back if something was wrong with the release. In this case, it's a good idea to mark the release being rolled back as bad, and block it from being promoted to other environments. To conditionally skip steps and mark the release as bad, the process needs to be modified:

Using the Notes field in a deployment step, you can provide documentation for the steps and which mode they'll run in. 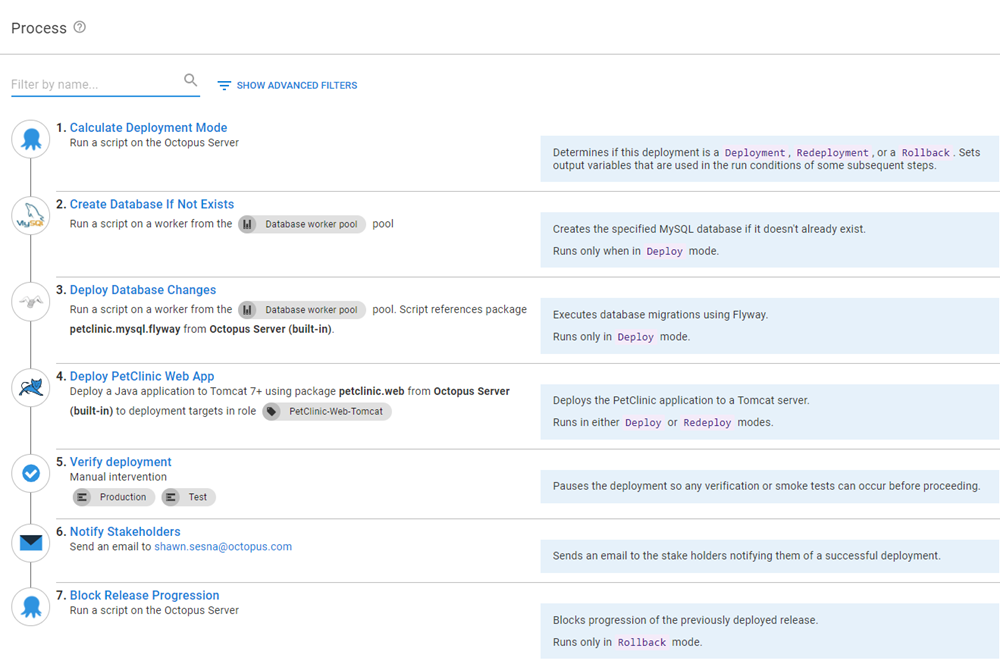 The first part of a rollback process is determining if it's a deployment, a rollback, or a redeployment operation.

Our team developed the community step template Calculate Deployment Mode which determines which mode the deployment is in, and produces a number of output variables containing a variable run condition syntax (see the documentation in the description of the step for more details).

The Create Database If Not Exists and Deploy Database Changes steps do not need to be run in a rollback. They need to be configured to be skipped. The RunOnDeploy output variable from the Calculate Deployment Mode can be applied to the variable run condition of these steps to skip them:

Blocking the progression of a release is not new in Octopus Deploy, however, it needs to be done via the UI or an API call.

Our team recognized that automating this activity is critical when dealing with rollbacks and developed the Block Release Progression template which automates the blocking of a release.

This step should only run during a rollback operation. Use the following output variable from Calculate Deployment Mode as the variable run condition to ensure this:

Both the built-in and simple rollback methods will extract and repackage the .war file before delivering it to the Tomcat server for deployment. If your application is large it could take some time. Using the Tomcat parallel deployment feature, it's possible to perform a rollback in seconds.

The parallel deployments feature was introduced in Tomcat version 7 and allows you to deploy multiple versions of the same application to a Tomcat server.

After a newer version of the application is in a running state, new sessions will run on the new version and existing sessions continue to run on the older version until they expire. You need to supply a version number with the context path. The Tomcat server combines the version number and context path and renames the deployed .war to <contextpath>##<version>.war

To implement a rollback process using the parallel deployments feature, you need to modify your process to look something like this: 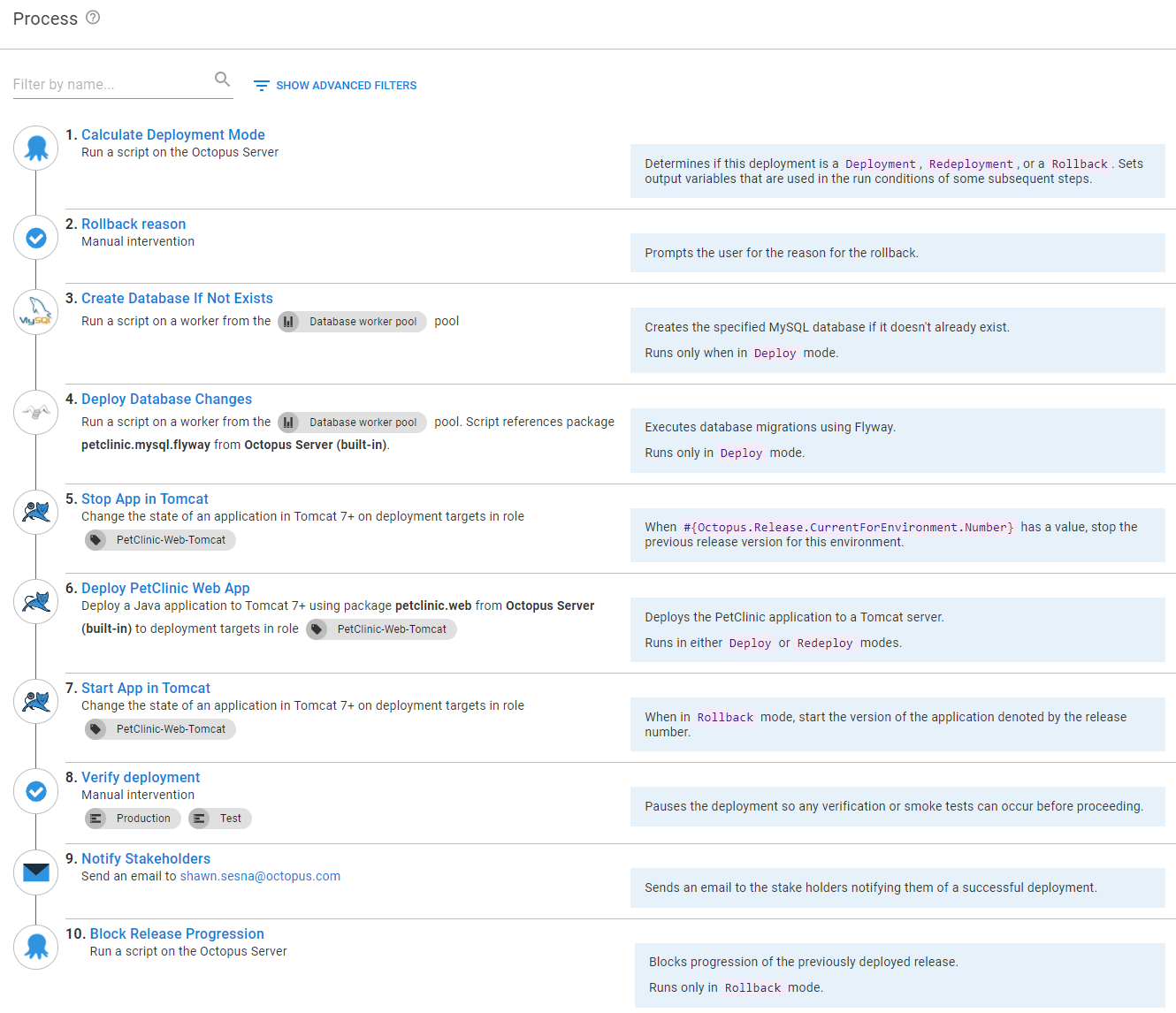 Let's go over the changes to the process to make this work.

The Rollback reason step is a manual intervention that prompts you for the reason for the rollback. The reason you specify is used in the Reason field in the Block Release Progression step further down in the process. This step only runs during a rollback so it needs to have the variable run condition set to the following:

Both the Stop and Start steps use the Start\Stop App in Tomcat step. The Stop step is optional when in Deployment Mode, but required in Rollback Mode as Tomcat will funnel new sessions to the most recent version of the deployed application that's running.

When rolling back, we need to stop the version that's bad so the previously deployed version will start getting the sessions.

Set the variable run condition to only run during rollback:

Alternatively, you can use the system variable Octopus.Release.CurrentForEnvironment.Number to check if there was a previously deployed release:

The version number for the Advanced Options for the Tomcat step is below with the selected action of Stop the application:

During a rollback, this process stops the version being rolled back.

You need a step that starts the version you're rolling back to. The version number specified in the Advanced Options for the Tomcat step is below with the selection action of Leave the application running:

This step needs to be configured to run in Rollback Mode only using the following variable run condition:

In the simple rollback scenario, the Reason field for the Block Progression is being statically set. The Rollback reason step prompts you for the reason for the rollback, and the Notes output variable can be used as the input of Reason to have a more meaningful message for the blocked release.

Modify the Reason field to use the Notes output variable from the Rollback reason step like this:

Enabling the undeployOldVersions feature in Tomcat can interfere with the complex rollback strategy.

Parallel deployments will appear similar to this in the Tomcat Manager: 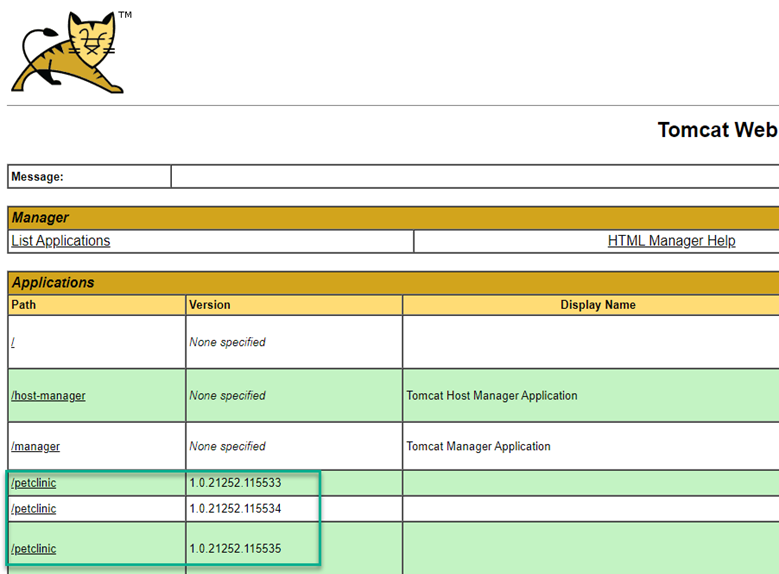 The retention policies of Octopus Deploy help keep your targets clean by removing old versions that have been deployed. However, the Tomcat Manager places the .war files in its own folder which is unknown to Octopus Deploy.

If you're not using the parallel deployment feature, the .war is simply overwritten with the new version and the application is deployed.

The parallel deployments feature of Tomcat renames the .war to <contextpath>##<version>.war so they are unique. These files will continue to accumulate unless an undeploy operation is executed against the versioned application entry.

To assist in Tomcat maintenance, our team developed Undeploy Tomcat Application via Manager, a community step template that performs undeploy operations on a Tomcat server, currently available in Bash syntax.

In this post I walked through several ways you can roll back an application deployment to an Apache Tomcat web server. I hope one of these methods will help you in your DevOps journey.