Update: Multi-tenant deployments will be shipping as part of Octopus Deploy 3.4 and Beta 2 has been released! See the 3.4 Beta 2 blog post for the latest information.

Update: We have revisited this RFC based on some compelling customer feedback! Read the updated RFC proposing Tenant as a first-class concept...

Octopus Deploy is designed to deploy software releases, and promote them through a series of environments with repeatable results. Octopus models this typical scenario nicely, but it doesn't scale well for multi-tenant applications. Let's consider the example discussed in our guidance for multi-tenant deployments using Octopus Deploy...

NameBadge make HR software for large corporate customers. They provide the software as a SaaS offering to their customers, and host the web site and associated services for them. Due to how the application is architected, for each customer, they deploy a different SQL database, a copy of an ASP.NET website, and a copy of a Windows Service.

The key issue in this scenario is that the same components need to be deployed multiple times, one for each end-customer, which makes it different from the scenarios Octopus is typically designed to handle.

To manage this kind of situation today we make three recommendations:

Sadly both environment-per-tenant and project-per-tenant scale poorly in Octopus and that is the problem we would like to solve, starting with this RFC!

This is a big RFC, but it's also a big set of features! We encourage you to take the time to understand what we're proposing, how it will affect your situation, and help us steer!

After helping many of our customers deal with multi-tenant deployments in Octopus we've seen the following themes:

The Octopus deployment engine and API can handle thousands of environments. The main complaint from our customers is the user experience for managing more than just a handful of environments is poor.

Based on our recommendation for environment-per-tenant you would need to:

If the end-customer requires a staging environment for testing and approving releases to their production environment, you'd have to repeat all of that for Staging-CustomerA.

Many of our customers automate the process for creating new tenants via the Octopus API, but that doesn't relieve the pain involved in the ongoing management of tenants over time.

No single place to manage a customer

When you are managing a customer with one or more environments you often need to jump around the Octopus user interface with little or no help navigating between pieces of information related to the same customer. Using a naming convention for environments, variable sets, accounts and dedicated machines is a really good idea, but it only gets you so far.

What we propose to do about multi-tenancy in Octopus Deploy

We are proposing to introduce a series of new features across the breadth of Octopus Deploy. We believe these features will benefit the vast majority of our customers in addition to those managing multi-tenant deployments.

One of most common problems we've discussed so far is dealing with lots of environments, especially that you cannot aggregate environments on the dashboards, and you cannot deal with environments as groups. We propose introducing tags to enable these types of scenarios.

Firstly you would determine which tags you want to make available by creating tag sets in the Library, with the valid list of tags for each tag set. Which tag sets and tags you create is completely up to your discretion. In this example we have created several tag sets each representing different attributes we want to leverage throughout Octopus Deploy.

Note these tags mean very little at the moment - read on to see how each of these different attributes can be leveraged to enable some compelling scenarios.

Octopus Deploy could now make these tag sets available when configuring your environments, and you could configure which actual tags you want applied to each environment. Take a look below and you'll notice the tag sets have been ordered to match the order from the Library. In this example we have tagged the Production-Tenant-Mobil environment as belonging to the Production phase, hosted in the Shared 2 hosting group, with the selected modules, and as a VIP customer. 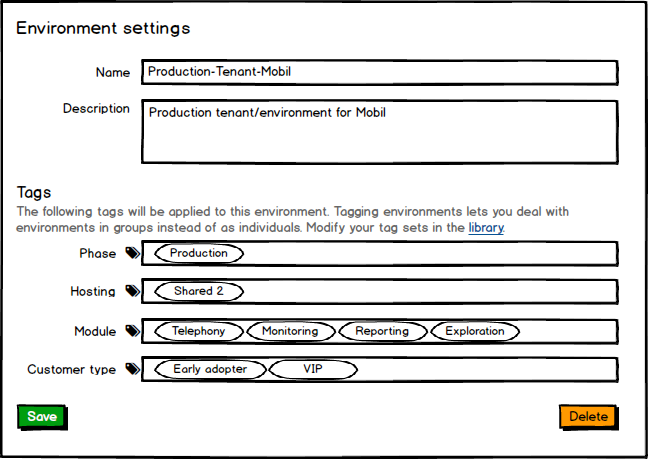 If you have lots of environments it would be a lot easier if you could manage which tags are applied to environments in bulk. This would enable you to add a new tag set, and very quickly tag all of your environments.

Once you have configured some tag sets and tagged some environments Octopus could aggregate the environments page by tag sets. You could drill directly in to one of the tags and be presented with the matching environments.

In this example we are grouping environments by the phase tag.

Similarly the project overview could be grouped by tag showing the release history as it does today.

Clicking on one of the groups could drill in to that group and show more details about the environments in the group. In this example we have clicked on the 3.2.6-3.2.7 to see details of that group. Notice we can now arrange the environments vertically (no more horizontal scrolling) and potentially filter environments by name or another tag. We can also show the release history for each environment, and the Deploy button so you can upgrade all of the production tenants from the same screen.

When you want to refer to an environment in Octopus Deploy today you need to reference it explicitly, by the environment name. After you have created some tag sets you could start referencing environments by tag. Consider this example of configuring a deployment target as a shared host for multiple environments before tag sets. 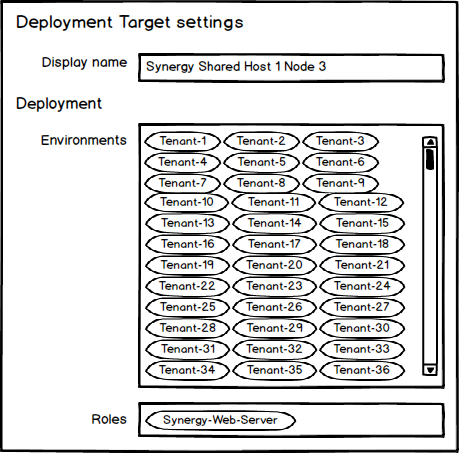 With tags you could simplify this deployment target, configuring it once, and allowing Octopus to dynamically resolve which environments apply at runtime. 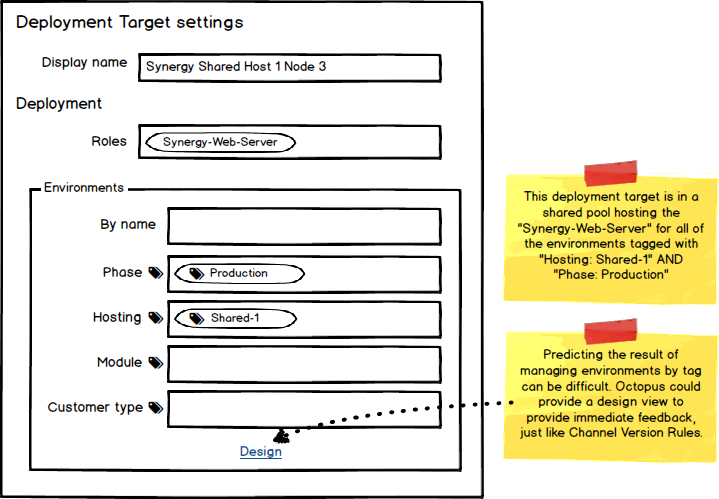 While referencing environments by tag will be more convenient in many ways, it could become more confusing depending on the complexity of each situation. To help tame the additional complexity we could provide a design view, similar to what we've done for designing the version rules for Channels. 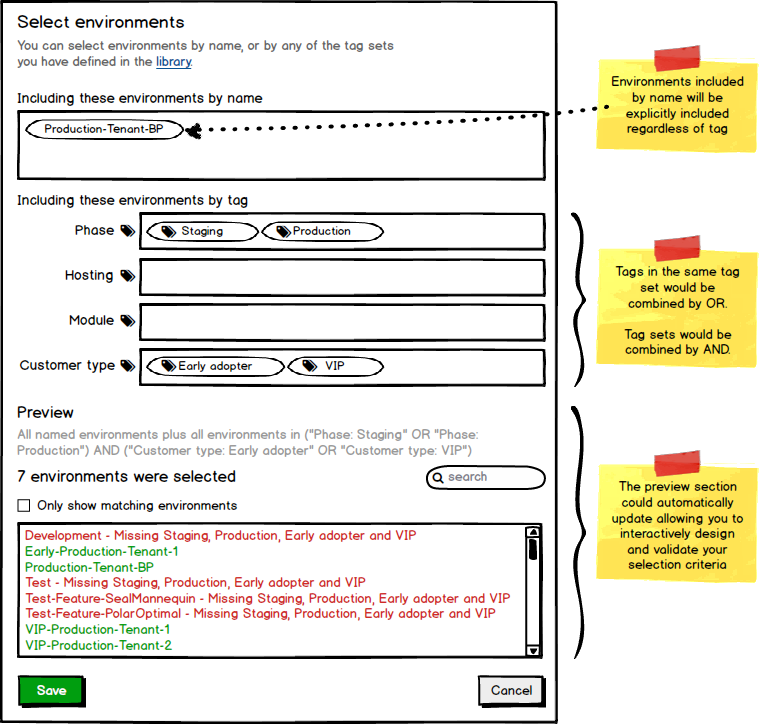 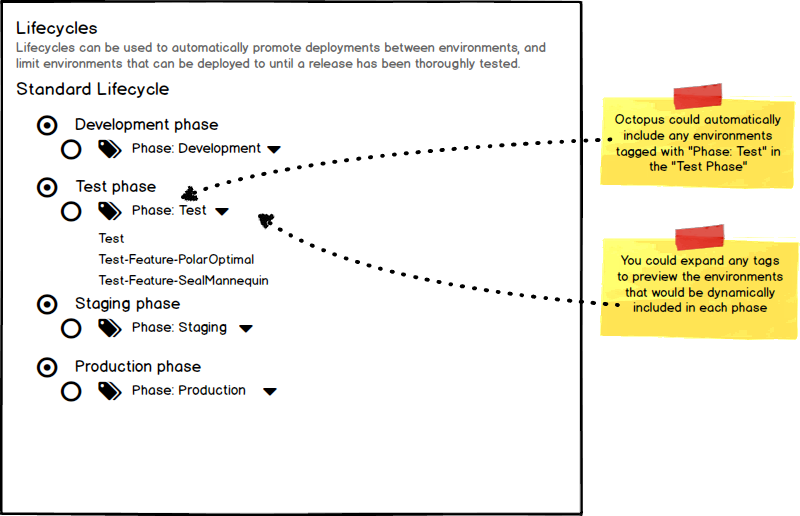 In this example all environments tagged with Phase: Production would be authorized to use the Synergy Production Subscription account. 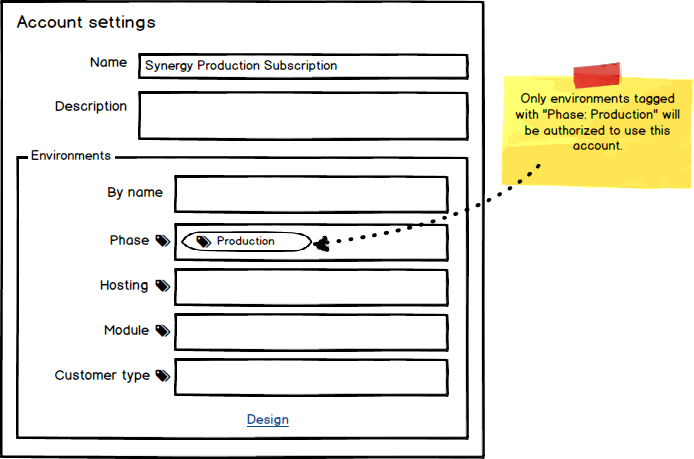 Scoping variable values would be more convenient if you could scope based on tags. In this example the variable value would be used when we deploy to any of the production tenants defined by the Phase: Production tag.

Similarly scoping deployment steps could become much simpler. In this example we have customized our deployment process based on several different tags. Firstly we will deploy the Exploration module to tenants tagged with Module: Exploration. We will also notify the priority support team when a VIP customer, tagged with Customer type: VIP, has been upgraded. We will also send a tailored email notification to our production tenants, tagged with Phase: Production, once their deployment has been completed successfully. 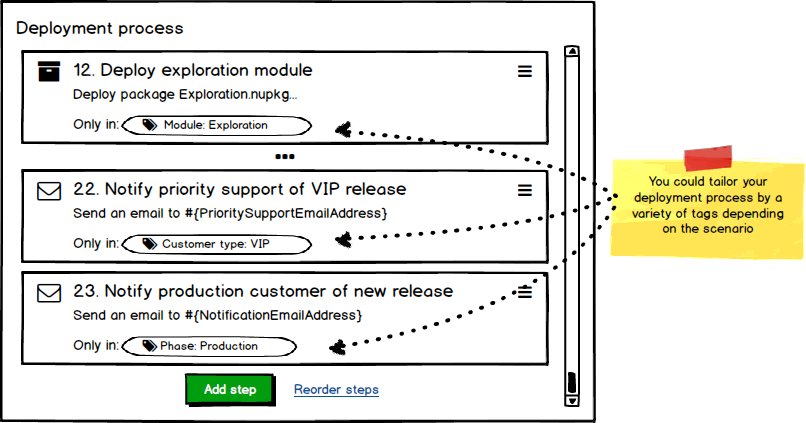 The next piece of the puzzle is managing variables specific to each tenant. To deal with this we are planning to let you add variables directly to an environment, but before we get on to that, how do you know which variables need to be added to these environments? Imagine if projects could define the variables required for each different environment, and then each environment could prompt you for the variables it requires. We are proposing to introduce the concept of variable templates. 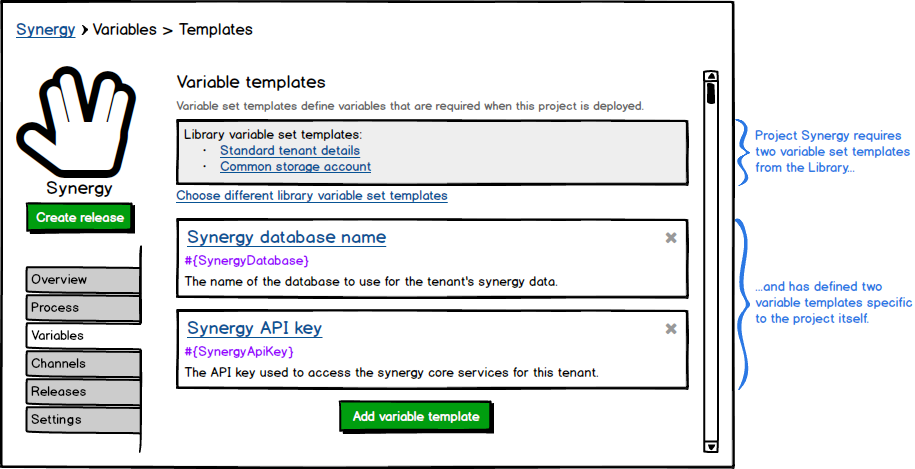 Each of these variable templates could be defined in a similar fashion to how parameters are defined for a step template, where you can provide the variable name, a label, help text, a default value and an input control type, such as single-line/multi-line text box, sensitive/password box, check box, or drop down.

Projects are already mapped to environments by way of lifecycles, so it would be natural to assume that an environment will use variable templates from any projects it is linked to via lifecycle.

In this example the Synergy project will be deployed to this environment, and based on the variable templates defined in Synergy, we require: 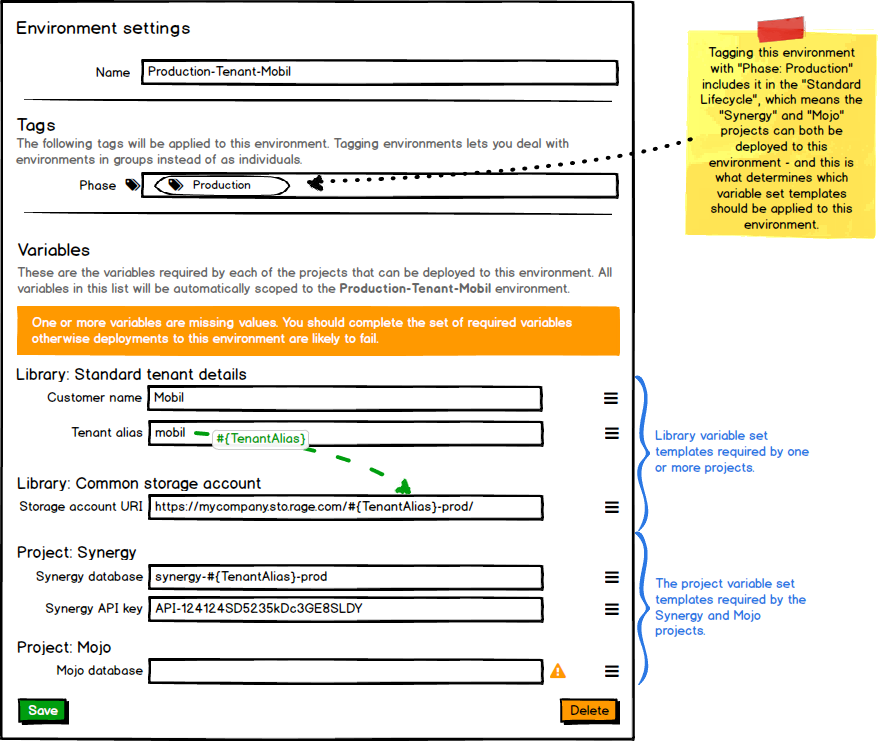 In this case we haven't defined a value for the MojoDatabase variable and are being prompted to set that value.

Today, variables in Octopus Deploy generally come from projects, library variable sets, or step templates. Adding environments as a source for variables will simplify some aspects of managing variables, but diagnosing problems with variables could become more difficult. We are proposing to add a variable inspector that will make it easier to get an overview of all of the variables in a project, their source, and if there are any problems. 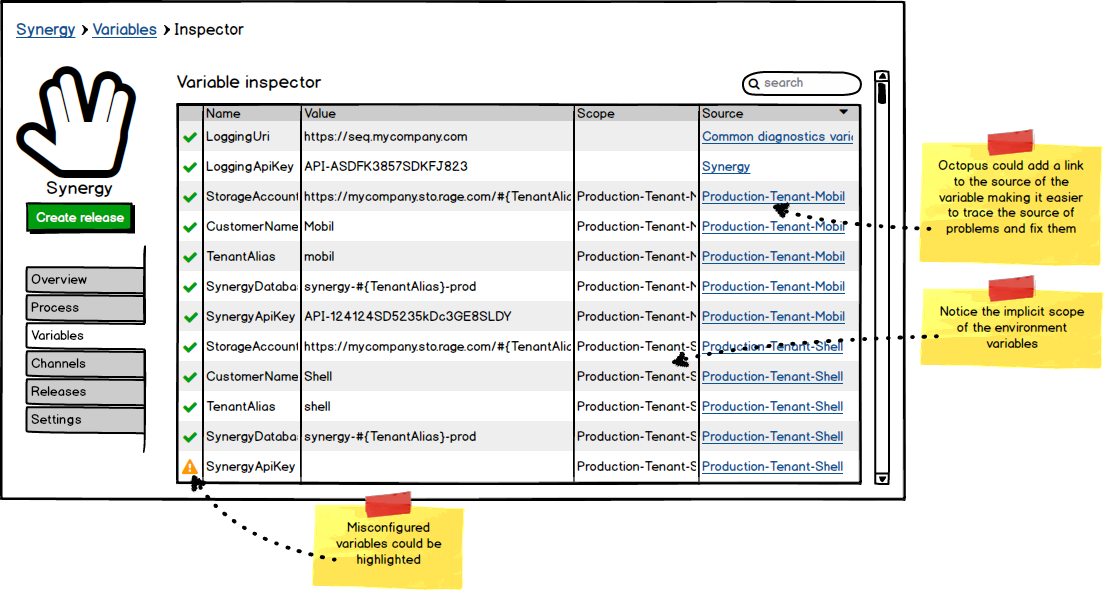 It's not just about multi-tenancy

Managing large-scale multi-tenant deployments in Octopus Deploy is clearly painful today. We believe the features proposed in this RFC will benefit the vast majority of our customers. Consider these scenarios:

With these features in place we hope the pain involved with managing large-scale multi-tenant deployments will be eased significantly. Consider what would be involved in creating a new tenant:

What do you think? This is your chance to speak up and help us build the right features for your environment.