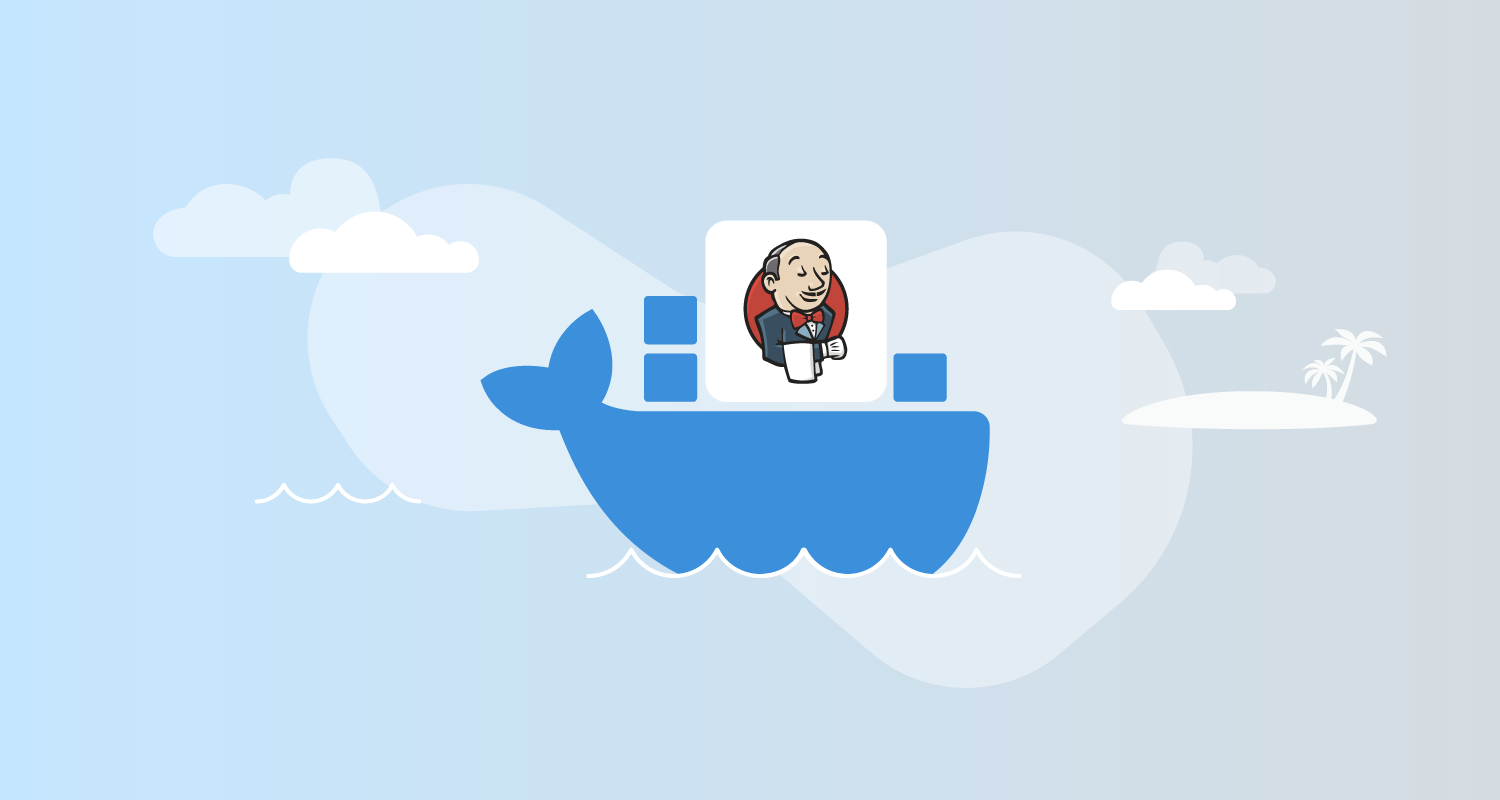 In this post you'll learn how to run Jenkins from a Docker image, configure it, customize it, and use the image as a replacement for a traditional package based installation.

To run a Docker image, you must have Docker installed. Docker provides detailed instructions for installation on Linux, macOS, and Windows.

Note that while recent versions of Windows gained native support for running Docker images, Jenkins only provides Linux based Docker images. Windows and macOS can run Linux Docker images through virtualization, so most of the commands shown here apply equally to all operating systems, but this post will focus on Linux.

Getting started with the Jenkins Docker image

After you have Docker installed, Jenkins can be run with the command:

Let's break this command down to understand what it's doing.

docker run is used to run a Docker image as a container.

A container is an isolated environment in the OS where the Docker image is executed. Although Docker doesn't typically provide the same kind of isolation guarantees that virtual machines do, containers do provide a way to easily run trusted code side-by-side.

The -p arguments map a local port to a port exposed by the Docker container. The first argument is the local port, followed by a colon, and then the container port.

Docker volumes allow containers to persist data outside of the container's lifecycle and share it with different containers. You can think of volumes as network drives you would typically see mounted into your session when logging into an enterprise network. By saving mutable data to a volume, you can destroy and recreate your Jenkins container, or create a new container based on a newer Docker image, while retaining any changes you made to the Jenkins configuration.

The final argument jenkins/jenkins:lts-jdk11 is the name of the Docker image. This particular image can be found on Dockerhub, which is one of many Docker registries available to host Docker images.

Note that the image associated with a Docker tag can change over time. Many registries use a "floating" tag to represent the latest version of an image. In the case of the Jenkins image, the image with the tag lts-jdk11 is updated with each LTS release.

To ensure your local machine has the latest image, you must manually run docker pull jenkins/jenkins:lts-jdk11. Be aware though that any existing containers will continue to use the old image, and you must create a new container to reference any updated images.

More specific tags, like 2.303.2-lts-jdk11, are generally not overwritten, so there is no reason to run docker pull on these images.

To view the container this command created, run:

You will see the basic details of the container, along with a (often humorous) name like nostalgic_tharp:

To define the container name, pass the --name argument:

The first time you boot Jenkins, the Docker logs will contain a message like this:

That random string of numbers and letters is the initial administrator password, which is required to complete the Jenkins configuration.

Open http://localhost:8080 when you see the following message in the logs:

You may have noticed that running Docker with the command above attaches your terminal to the container output stream. To run the Docker image in the background, use the -d or --detach argument:

Because Jenkins is written in Java, the default server created by running the Jenkins Docker image has most of the software required to compile and test Java applications.

To build applications written in other languages, you connect external Jenkins agents with the required software and run jobs on those. Using agents is a scalable solution, and one that you should consider if you're using Jenkins in a production environment.

For local testing though, a more convenient solution is to build a custom Docker image with the required tools baked in. To do this, you need to create a file called Dockerfile with contents similar to the following:

Dockerfile files are used to build new Docker images. You can find a complete reference of the commands available in a Dockerfile from the Docker documentation. The example above uses a small subset of the commands, but demonstrates a typical custom image based on the image provided by Jenkins.

The file starts with the FROM command, which instructs Docker to build the new image from the supplied image. This means your new image will have Jenkins and any supporting tooling already installed and configured:

The next command performs the software installation. This example installs the Octopus CLI using the instructions from the Octopus website:

It's considered best practice to have a regular user account run the application in the Docker container. The jenkins user was created in the base image, and so you switch back to that user with the final command:

To build a new Docker image with the Dockerfile, run:

Then run your new image mounting the existing jenkins_home volume to retain all your existing Jenkins configuration:

The easiest way to install new plugins is to use the Jenkins web UI. Any new plugins are saved to the external volume, so they're available even as you create, destroy, and update containers.

You can also automate the process of installing plugins by calling the jenkins-plugin-cli script, included in the base Jenkins image, as part of your custom Docker image.

Here is an example Dockerfile that installs the Octopus Jenkins plugin:

This Dockerfile is similar to the previous example, but includes a new RUN statement to install the Octopus plugin:

The plugin ID (octopusdeploy) and version (3.1.6) are found from the Jenkins plugin website:

To publish your custom Docker image, you need an account with a Docker registry. DockerHub is a popular choice, and provides free hosting of public images.

Create a free account, and then login with the command:

To build an image that can be published to DockerHub, run the following command, replacing username with your DockerHub username:

Publish the image with this command:

My DockerHub username is mcasperson, so I run these commands to build and publish an image:

My custom Docker image is then available from DockerHub.

To define the JAVA_OPTS environment variable, pass the --env argument to the docker run command:

A list of Jenkins system properties can be found in the Jenkins documentation.

In addition to system properties, Jenkins also accepts a number of application arguments.

Application arguments are defined by appending them to the end of the Docker run command. The example below passes the --httpPort argument configuring Jenkins to listen on port 8081:

Application arguments may also be defined in the JENKINS_OPTS environment variable:

A list of application arguments can be found in the Winstone GitHub repository. Winstone is the default embedded servlet container in Jenkins.

You can run the following command to backup the data saved in the Docker volume hosting the /var/jenkins_home directory. It mounts the volume in a new container, mounts the current working directory in the container's /backup directory, and creates an archive called backup.tar containing the contents of the /var/jenkins directory:

This command can be run while the Jenkins container is running because Docker volumes can be shared between running containers. However, it's recommended you stop Jenkins before performing a backup:

Even though Jenkins takes advantage of COW, it is recommended that you stop Jenkins if possible before performing a backup because the pipeline workflow XML files may get captured in an inconsistent state (for example if the backup does not take an 'instant snapshot' of every file at that exact moment).

A production instance of Jenkins must be automatically restarted when the underlying operating system is restarted. However, this is not the default behavior of the containers you have launched using the Docker commands shown above, so any Jenkins containers will remain stopped after an OS restart.

To create a new systemd service, save the following contents to the file /etc/systemd/system/docker-jenkins.service:

To load the new service file, run the command:

To start the service, run the command:

To enable the service to run on restart, run the command:

To view the service logs, run the command:

Running Jenkins from a Docker image provides a convenient method for launching Jenkins in a self-contained and preconfigured environment.

Running Docker images on a workstation or server is just the beginning though. In the next post, you'll learn how to deploy Jenkins to a Kubernetes cluster.

Try our free Jenkins Pipeline Generator tool to create a Pipeline file in Groovy syntax. It's everything you need to get your Pipeline project started.

Read the rest of our Continuous Integration series.