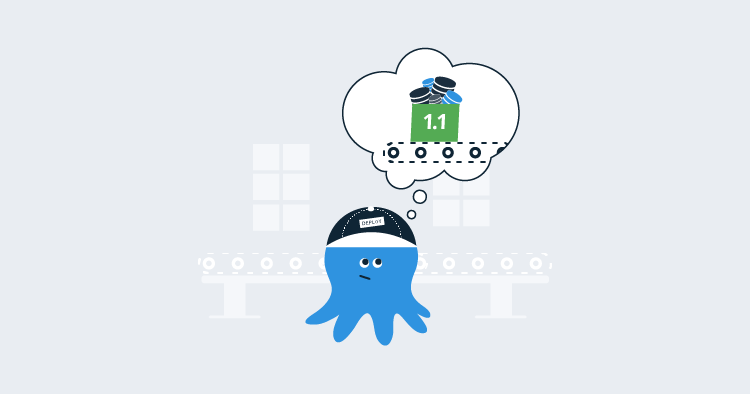 I demonstrate the principles with Microsoft SQL Server, but those same principles also apply to your database technology of choice.

Deploying databases can be very complex, and there are multiple approaches. Octopus Deploy integrates with multiple third-party tools and approaches, but this flexibility means there’s a lot to choose from, and as you evaluate third-party tools you’ll find they approach deployments in one of two ways, and each approach has its pros and cons.

The database desired state is stored as files in source control. Depending on the tool you use, the files with the desired state could be a series of create scripts, an XML file, or something completely different. The important thing to know is the tool will be responsible for updating and maintaining those files.

The tooling for the state-based approach often integrates with your IDE. For example, Redgate’s tooling integrates with SQL Server Management Studio, and Microsoft’s SSDT tooling integrates with Visual Studio. The changes to the schema are made using the IDE, and then the plug-in for the IDE takes over. It runs a comparison to determine the difference between the change and what is currently in source control. Then it makes the change to the necessary script on the file system.

All the file system interaction happens behind the scenes. The tool keeps track of all the changes, and this allows you to focus on making the database changes and testing them. After you’ve tested those changes, you use the tool to update the files in source control.

A unique delta script is generated during deployment per environment. This is because a change could have been applied to one environment (dev) but not a higher environment (pre-production or production). That makes the tooling much more complex, and every once in a while, the tool will generate a delta script where an unexpected change is included, especially if permissions are not set correctly.

The tooling will want to control everything about the database, from the tables to the schemas to the users. You must configure the tool to ignore certain parts of the database.

As smart as the tooling is, it has a difficult time handling more complex changes. For example, when moving a column from one table to another, the tool doesn’t know that’s your intention, and it will drop the column from the old table and create a new empty column in the new table. The tooling will often include some sort of migration script functionality where you can write your own migration scripts, but the migration scripts have their own rules, and you must adhere to.

This lack of control can be a burden at times. You might end up creating a custom process that works alongside the tool. For example, the tool might not support post-deployment scripts, and in order to get that, you have to create a post-deploy folder that can be packaged and sent to Octopus. You would then have to update your process in Octopus to look for the folder and run any scripts it finds. It works, but now you are responsible for maintaining that process.

A database migration scripts approach is where all the necessary delta scripts are handwritten. This is also known as change driven or script based. Those scripts are checked into source control. During the deployment, the tool will look to see which migration scripts have not been run on the destination database and run them in a specific order. 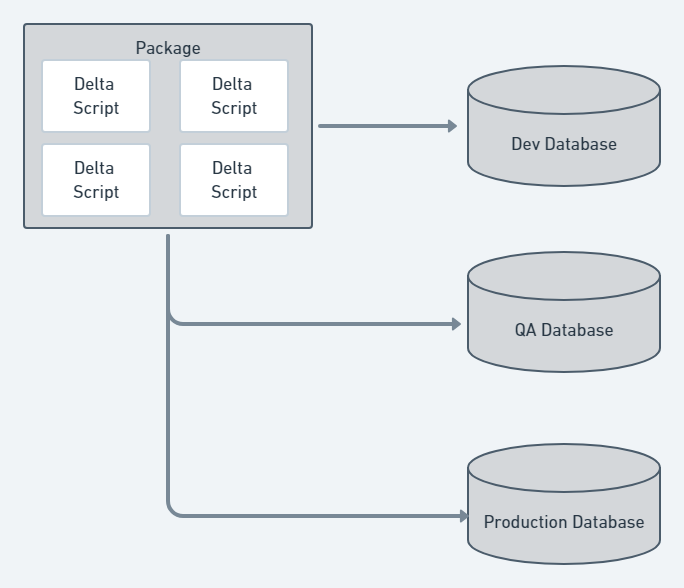 With the migration scripts approach, you have complete control over all the scripts. When deploying a change, you know exactly what script is going to run. Complex changes are much easier to deal with; you just need to write the script and save it to source control. Some migration frameworks allow you to write code to do migrations to make it easier to implement more complex changes. In addition, it is much easier to exclude items from deployments. Just don’t include the script for items you want to exclude.

It is much harder to see the history of a specific object like a table or a stored procedure. Instead of going to a single file and viewing the history, you must do a search to find all the files where the object was changed. Depending on the number of table changes, it could be easy to miss a key change.

Finally, a lot of developers are not expert SQL developers. They use the SQL Server Management Studio UI to create tables and indexes, and they don’t know how to write a lot of the changes being made by hand. It takes a lot of practice to get the T-SQL syntax memorized. In the case where the tool allows you to write code for more complex changes, there’s another learning curve to understand the syntax and the rules.

The right approach is very subjective.

The state-based approach works best when any of the following apply:

Don’t be surprised if you initially start with the state-based approach, and after a few years, decide to move to the change-driven approach. When you pick a vendor, RedGate, Microsoft, etc., be sure they offer a software suite that allows for either approach.

The shared model is the opposite of that. When using a shared model, you don‘t get the flexibility of branching; everyone has to be up to date with their code. Don’t get me wrong, a shared model can work, but it works best with a few developers with a static database schema. As the team scales out, the shared model falls apart quickly.

Automating database deployments introduces an interesting challenge. Prior to the automation, a developer could make a change on a shared database, and everyone would see it right away. That made it harder to step on each other’s toes. But with automated database deployments and dedicated databases, the risk is much higher. A change to a table could be made by developer A in their branch, the same table could be changed by developer B in their branch, and both of those changes could conflict with each other. This means there needs to be a mechanism to let others know what changes are being made. It could be something as simple as a slack message or a discussion during a daily stand-up. The important thing is to make sure everyone is on the same page.

In the past, DBAs were the ones who ran the scripts in production because they had the permissions. Now an automated process will do that work, which can be really scary. If something goes wrong and the data is lost, it could be very difficult to recover it. Everyone has to trust the process and tooling. In my experience, the best way to build trust is to use Octopus Deploy artifacts and set permissions on SQL Server.

With Octopus Deploy artifacts, you can create a file containing all the scripts about to be run on the Tentacle and upload it to the server. A DBA can approve that script prior to running it on the database.

In some cases, the step template provided by the third-party has artifact creation directly built-in. For example, here is the process for deploying tooling using Redgate:

During the deployment, it created the artifacts automatically: 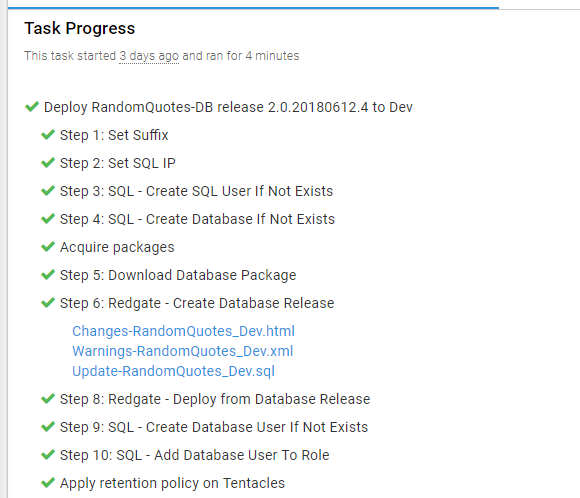 The artifacts help build that trust by not allowing an approval process, but it also provides an audit history. In three months, I could come back to this deployment and view what changed on the database.

When implementing automated database deployments, a common question I hear is, “how can we prevent someone from inserting a script to give themselves sysadmin privileges?” Using artifacts is a good start, but it doesn’t completely solve the problem. If the DBA, or the person doing the approval, is swamped, they could easily miss that specific SQL statement in the artifact. The best way to prevent that from happening is to restrict the permission on the account doing the deployment. Our documentation provides several examples, from the least restrictive to the most restrictive. Keep in mind, those are recommendations. I encourage talking to your team to determine what you are comfortable with.

Where to install the Tentacle

You don’t want to install the Tentacle directly on the SQL Server. SQL Server is often a cluster or a high-availability group, and the Tentacles will try to apply the changes to all the nodes at the same time. You do not want to have the Tentacles being used to deploy Windows services or IIS web applications handle database deployments. Those Tentacles could be in a DMZ. The Tentacle should be running under a specific service account with the necessary permissions to perform the deployment. The majority of the tools make use of port 1433 and simply run a series of T-SQL scripts. The Tentacle can be installed on any machine as long as it has a connection to the database. For those reasons, I recommend you make use of a jump box that sits between Octopus Deploy and SQL Server.

Please refer to our documentation for more information.

At first glance, this feels like a lot of prep-work, but the important thing to remember is these are guidelines. Don’t spend weeks discussing and debating, come up with an initial plan and iterate. At the start of this process, we spent about two days discussing and working through our initial plan.

My recommendation for rolling this out is: