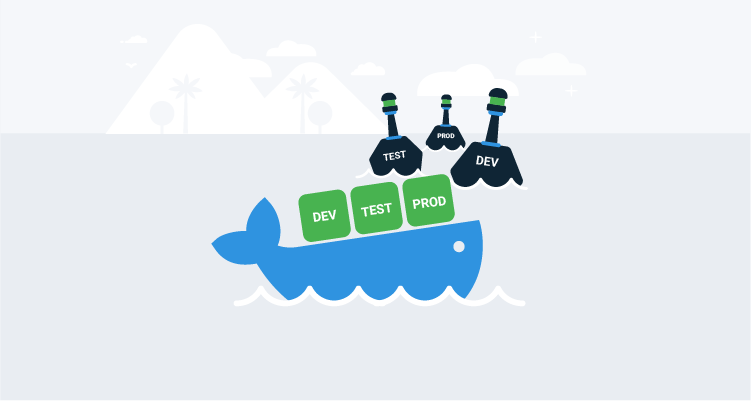 If you have ever deployed an application in Octopus before, you have probably made use of variable substitution in files as a way of taking a generic application package and injecting environment specific configuration during deployment. This process is convenient because you can produce a single application artifact, and each environment is then responsible for customizing it to match the local infrastructure.

Replacing files in application packages like ZIPs or NUPKGs is straight forward because theses files are standard archives, and can be easily modified after they are downloaded from the artifact repository but before they are deployed to their final target.

Docker image files aren’t quite as easy to work with. For a start, there is some magic in the way the layers are built up to ensure that both new and deleted files are respected, meaning unpacking a Docker image file is not as simple as untar-ing the individual layers. Second, Kubernetes expects to pull down an image directly from a repository, which removes Octopus from the pipeline as far as distributing customized artifacts is concerned.

The good news is that we can take advantage of some open source tools created by the community for downloading and unpacking Docker images, and then use the native ability in Kubernetes to mount individual files into Pods to achieve much the same end result as deploying a modified package.

To demonstrate template file processing we have a very simple Docker image based on HTTPD that will display a HTML page with the name of the current environment. The code for this image can be found on GitHub and has been published as the image mcasperson/dockerfilereplacement.

The HTML file that is displayed by the Docker app is shown below. The string #{Octopus.Environment.Name} is intended to be replaced with the name of the environment once the deployment has been completed with Octopus:

To see this Docker image in action, we’ll run the Docker image locally with the following Docker run command:

As you would expect, running this Docker image locally displays the web page in its unprocessed form. 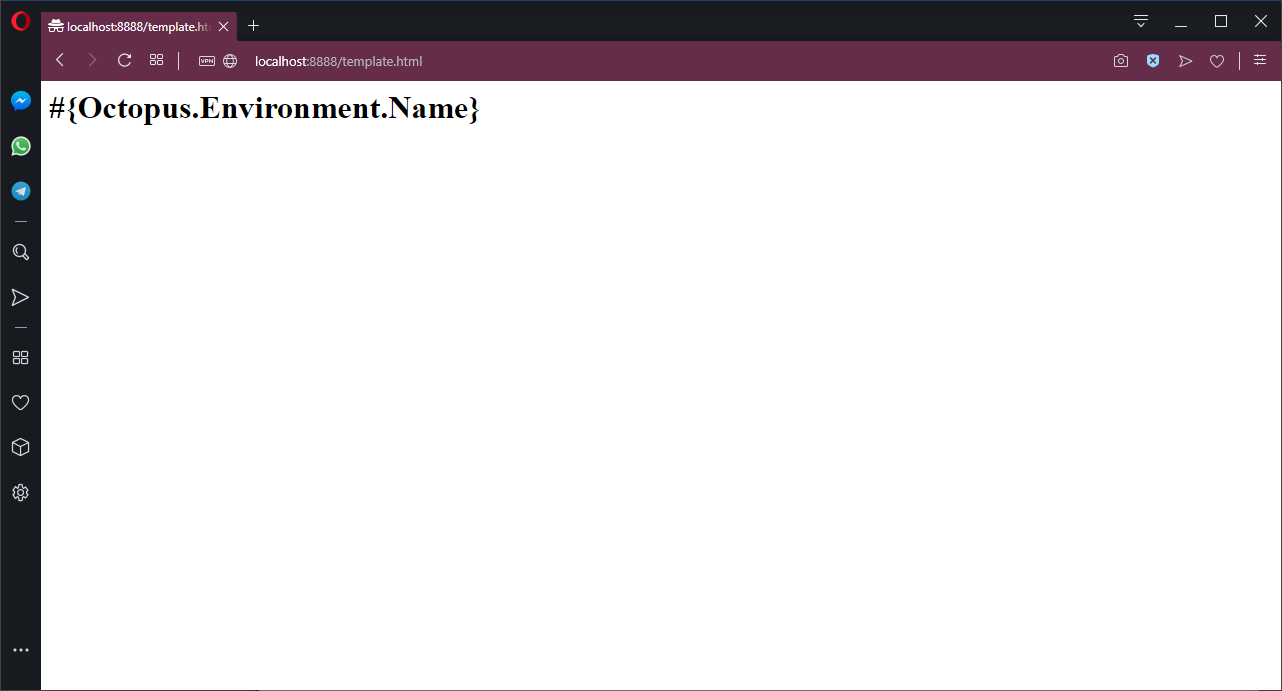 When run directly by Docker, the web server exposes the raw template file.

The first tool is called skopeo. We’ll use skopeo to download a Docker image and save it as a single, self-contained file on the local disk.

The second tool is called umoci. We’ll use umoci to unpack the file downloaded by skopeo, allowing us access to the final directory structure created by all the individual layers in a Docker image.

While both these tools are open source, getting binary builds can be challenging. For this exercise, I am using a SUSE Linux VM (i.e. SUSE Linux Enterprise Server) as an Octopus worker. SUSE created umoci and provides binary downloads from the GitHub releases page, while the standard SUSE package repositories contain a build of skopeo, which means we don’t have to go through the pain of trying to build these tools ourselves.

Downloading and extracting the Docker image

Let’s take a look at the bash script, run by the Octopus Run a script step, that will download, extract and save the contents of a file from a Docker image:

We start with a bash function that reads the contents of the file, supplied as the first argument, line by line. The resulting string is then saved back into a global variable, whose name is passed in as the second argument (because bash functions can only return integer exit codes), using printf:

The Docker image is downloaded by skopeo, and saved in an Open Container Initiative (OCI) bundle called image:

This file is then unpacked with umoci:

Once we have the contents of the file, we save it as an output variable:

With the contents of the file saved as an Octopus variable, the next step is to create a Kubernetes ConfigMap that holds the processed value. We’ll do this with the Deploy raw Kubernetes YAML step in Octopus.

The following is the Kubernetes YAML that the step will deploy to create the ConfigMap:

The template.html field is the important part of this config map. The key defines the filename that we are replacing, and the value of "#{Octopus.Action[Extract File].Output.TemplateHtml}" will result in the contents of the file that we extracted in the last step being processed and then assigned to this key. Importantly this means that any nested variables references in the variable Octopus.Action[Extract File].Output.TemplateHtml will be replaced.

The end result is a ConfigMap that holds the original contents of the template.html file but with any variable replacements performed.

The final step is to take the value from the Kubernetes ConfigMap and have it mounted back into the Kubernetes Pod, thus replacing the original, unprocessed file. We’ll do this through the Deploy Kubernetes containers step in Octopus.

This is done by defining a Volume that references the ConfigMap created in the previous step.

The summary of the Kubernetes Volume.

The details of the Kubernetes Volume.

The ConfigMap is then mounted into the Pod. The trick here is to set the Mount path to the full path of the individual file to be replaced and set the Sub path to the entry from the ConfigMap that has the contents of the file.

With this configuration we will mount a single file in the Pod containing the value from the ConfigMap, replacing the original generic file.

A Kubernetes volume mount that adds a single file to the Kubernetes container.

For completeness, this is the Container section from the Deploy Kubernetes containers step. You can see we are deploying the image mcasperson/dockerfilereplacement, exposing port 80, and mounting the ConfigMap as a volume.

The summary of the Kubernetes container configuration.

For convenience, this Pod will be exposed directly by a LoadBalancer service. This gives us a public IP address that we can use to interact with the Pod. 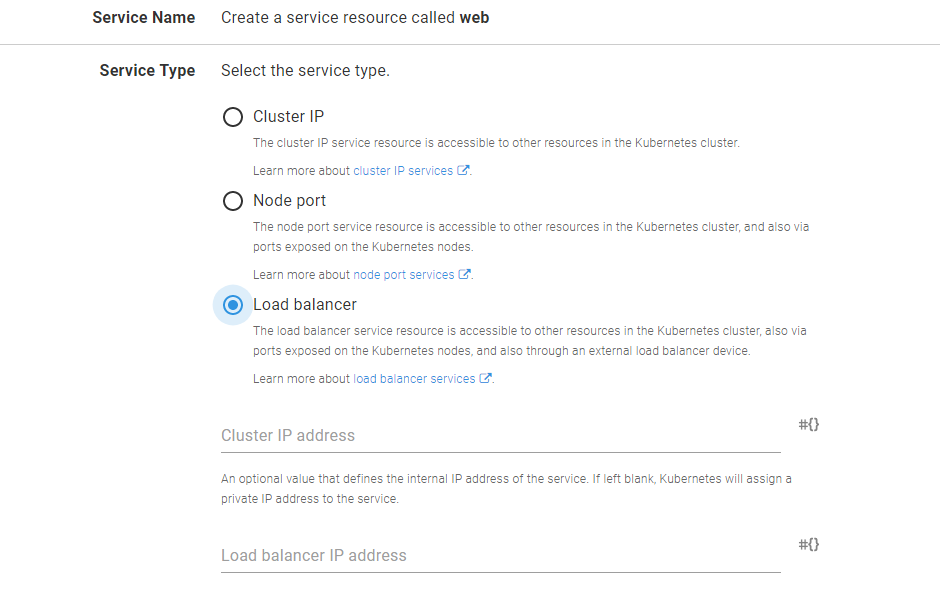 The Pod is exposed by a LoadBalancer service.

The service exposes port 80 from the Pod.

Once this deployment completes, we will have a public IP that we can use to access the web server. Now when we open the template.html page, we get the HTML template file with the variables replaced. This means we now see the name of the environment in the body of the web page. 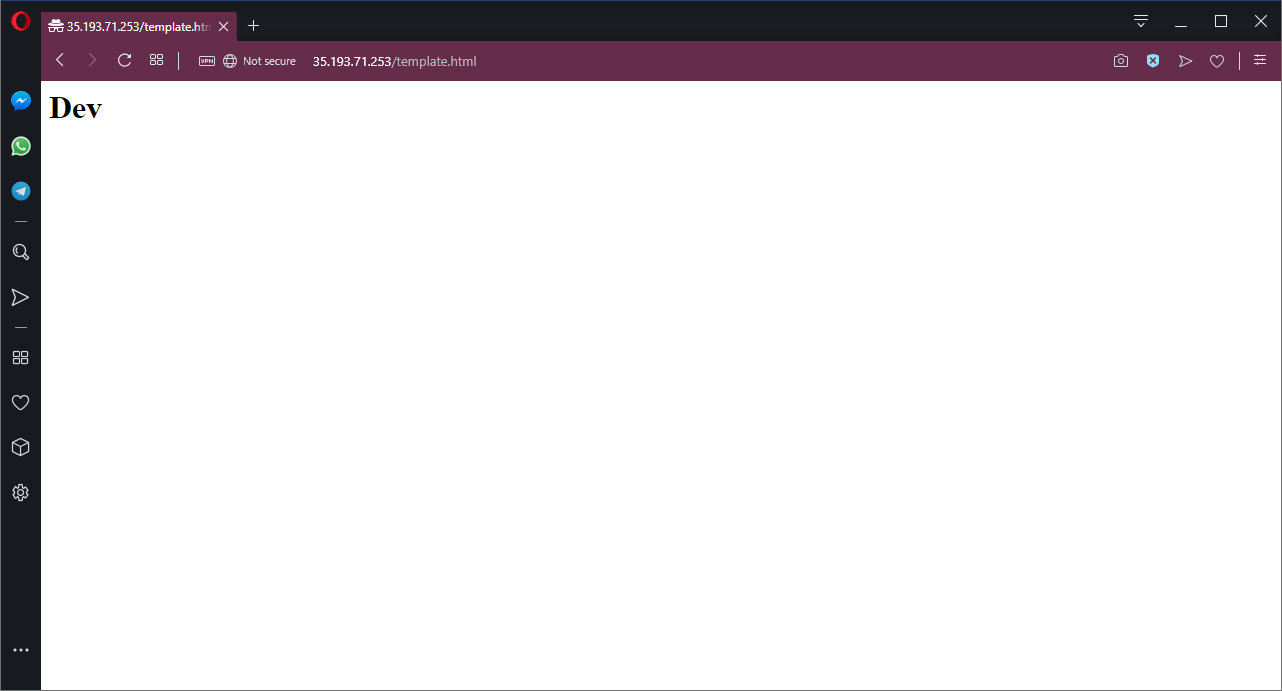 HTTPD presenting the processed template.html file from the Dev environment.

If we then progress this deployment to the next environment, we can see that the newly created load balancer exposes a Pod with the environment name Test placed into template.html. 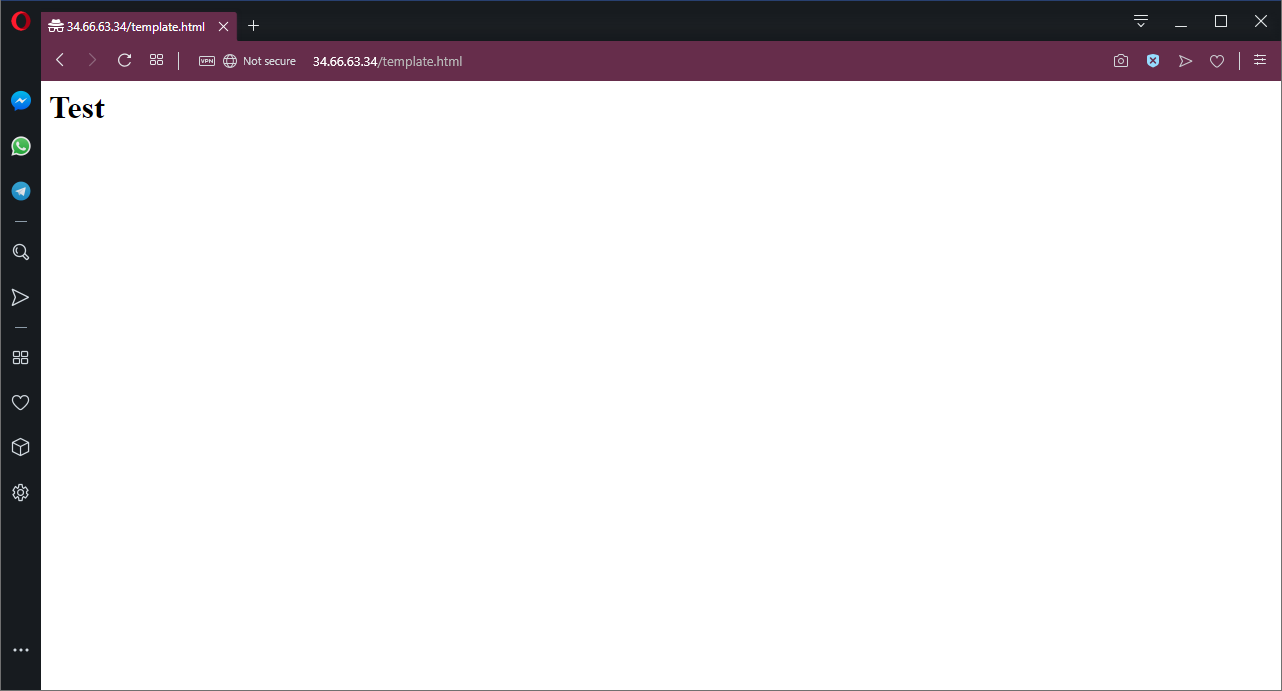 The same template.html file after the deployment was pushed to the Test environment.

File variable replacements are a convenient way to create generic packages that can be deployed to any environment. Although it takes a few additional steps, this same workflow can be applied to Kubernetes deployments.

By taking advantage of skopeo and umoci to download and extract the Docker images, and then using ConfigMaps as volume mounts in Kubernetes, we can achieve the effect of replacing templated files during deployments without having to publish environment specific Docker images.