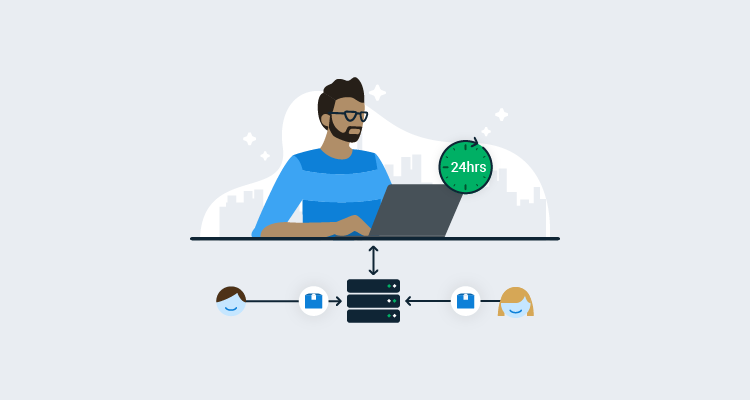 This blog post is part 7 of my safe schema updates series. Links to the other posts in this series are available below:

Small, frequent, and simple changes are safer. Big, infrequent, and complex changes are more dangerous. If you disagree, re-read this series from the beginning, starting with my post about database delivery hell.

A period of downtime is probably required because we can’t risk serving mismatched versions:

Throughout this process, our users are locked out.

There are a hundred ways this could end badly. The Phoenix Project featured just such a disaster. A database update took longer than anticipated and critical systems could not be restored on time.

Despite the risk, if we have database schemas, it’s unwise to avoid making schema changes. Such a rigid strategy, over time, results in horrible architectures that do not reflect evolving business requirements.

Our goal is to enable the schema to evolve safely. Therefore, we need to ensure such deployments are executed small and often.

Unfortunately, the more downtime is required for each deployment, the less frequently we’ll be able to do it. We’ll never be deploying 10 times a day if each deployment requires an hour of downtime.

Since these opportunities don’t come often, changes will be batched up. As many changes as possible will be crammed into the shortest possible window.

This… is stupid. (See opening paragraph.)

The inescapable conclusion: It’s essential that we perform schema changes with as little downtime as possible. Only through minimizing downtime, can we increase deployment frequency, decrease deployment size/complexity, and deliver safer schema updates.

In my experience, for all the talk about source control and deployment automation, the necessity to minimize downtime is under-appreciated by those who have database schemas and wish to keep them safe.

This post is not about the automation or execution of schema updates – there are many other posts about that. This post is about patterns for minimizing downtime.

Many people use the words “release” and “deployment” interchangeably, without considering the difference between them.

If you use Octopus Deploy (or a similar product) your idea of what “release” means may be the result of common naming conventions in your tooling. In most deployment automation tools a “release” is a specific version of your source code, a bunch of configuration variables, and a set of steps that need to be run to execute a “deployment”. You might consider a “release” to be something that gets “deployed”. The release happens first, and the deployment comes later. That probably feels completely natural to you.

You are in the minority.

To most people, and specifically to anyone in marketing, a “release” is something different. “Releasing” a new version of your software, or the latest iPhone, or the new Adele album, is about making it available and telling people about it. The thing is created in advance, and released later. The latest James Bond film was produced in 2020, but the release was delayed until 2021.

It is crucial to differentiate between deploying changes and releasing/revealing those changes to users. These two things do not need to happen at the same time. In fact, it’s the ability to separate these events that enables zero downtime releases, as well as all sorts of other exciting practices, such as testing in production and some rapid rollback patterns.

This post is about database deployment, but databases don’t live in isolation. We need to start with some context.

Infrastructure-based techniques include blue/green deployments, canary releases, and cluster immune systems. They are typically based on clever load balancing tricks. The new code is deployed on new infrastructure, tested, and added into rotation.

By changing settings in our load balancer we can send traffic to either the new or old infra. This potentially allows us to “release” the new version gradually. First to 1% of our production traffic, then 5%, 10%, gradually throttling it as we watch the telemetry, our social media channels, and/or our support tickets to check everything is running smoothly.

If all goes well, the release will be gradually rolled out globally. If not, we can revert to the old version instantly by undoing the setting on the load balancer. We avoided any in-situ upgrades, so the old servers are still running and ready to receive the full load if required.

Application-based approaches tend to be based on feature-toggles/flags. The old and new version will be deployed side by side, but which version gets executed can be managed with code and some external database.

This allows new features to be released or rolled back by changing a setting in an external database. No additional deployment is necessary.

We can take this further. Perhaps, if we have a new feature, but we are concerned about performance, we could run both blocks of code, but only display the old functionality in the UI. This is called dark launching, and it allows engineers to test the performance of their code with live production workloads, with an easy way to throttle up and down or kill the new code.

You can read more about application patterns in the post Deploy != Release. This is also covered in more detail in The DevOps Handbook.

The thing that both infrastructure-based and application-based patterns have in common is that the code is deployed first, and released afterwards, in a controlled and testable manner, allowing for rapid, almost immediate, rollbacks.

What does this mean for databases? Forward and backward compatibility is essential.

Expand/contract, for forward and backward compatibility

If we wish to make a schema change in the database which will affect our dependent services, and if we wish to avoid scheduled downtime, we are likely to be following one of the application or infrastructure-based patterns discussed above. In either case, we need to evolve the database through three phases.

This single, grand refactor is going to require multiple small schema changes. To avoid scheduling downtime, each change must have the following attributes:

It’s easiest to explain with an example: Consider the splitting of a fullName column, into separate firstName and lastName columns. We can deliver this without any risky downtime windows or scary schema updates as follows:

Now the database supports both versions.

This is a much safer way to update your schemas. Crucially, since it does not require any downtime, these changes do not need to be batched up for release.

If this refactor needs approval, it should be reviewed as a whole, even if it’s executed in steps. And most of the testing and deployment pipeline should be automated.

Yes: This is harder. No one said this was going to be easy. We’re optimizing for safety, and that requires rigor and effort.

Of course, with more dependencies, this is harder. Some might think it’s unfeasible. Certainly this process requires a certain level of defensive programming and testing/telemetry in any dependent systems.

In an ideal world we’d be working with loosely coupled systems (see part 4 and part 5 of my series). These are coded defensively by default and database dependencies are significantly reduced. Attributes that make all this a lot easier.

If your system is tightly-coupled, perhaps by now you are seeing the enormous benefits of loose-coupling. Perhaps you are also daunted by the perceived enormity of the challenge ahead: evolving your tangled web of dependencies into something safer.

Next time, we finish this series by exploring the Strangler pattern. A method for safely refactoring complex, tightly-coupled systems.

Links to the other posts in this series are available below: