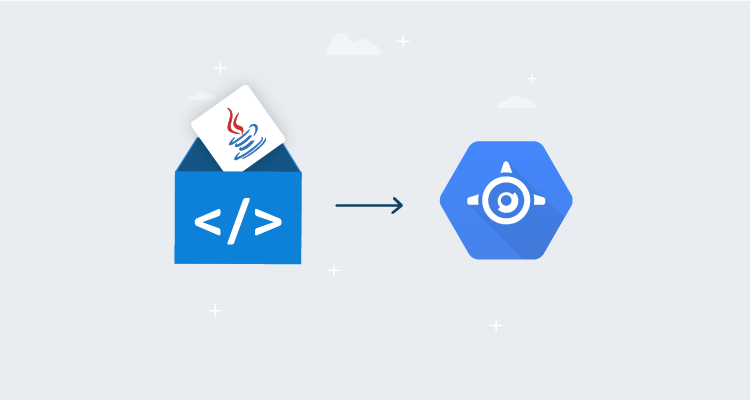 Google App Engine (GAE) is one of the original Platform as a Service (PaaS) offerings provided by the Google Cloud Platform (GCP).

In this post, I look at how to deploy a sample application to GAE and manipulate the networking to implement common deployment scenarios like blue/green, canary, and feature branch deployments.

Allowing GAE to compile your source code is convenient, although for this example I use a JAR file that's already been compiled by our CI system.

You then define the environment that will host your web app:

Some instructions on the next steps are provided while the GAE instance is being created.

The end result of this process is the creation of the Application shown in the diagram below:

Only one application resource can exist per project. If you attempt to create another application, say in a different region, you see an error like this:

Services are (somewhat confusingly) defined in a file called app.yaml. Here is an example app.yaml file that you can use to define and deploy your Java web app:

The runtime is a required property defining the platform that will host your code. I couldn't find a definite list of runtimes, but java, java8, and java11 are all included in various places in the documentation and examples. I use java11 here as Java 11 is part of the GAE second generation.

The first service that's deployed to GAE must be called default, so I defined that name in the service field.

If you try to deploy a service with a name other than default, you get the error:

You also need to use a slightly larger instance than what is provided by default. This is defined in the instance_class property. The F2 instance provides 512MB of memory, which you need for your web app.

Compile the Java application with the command:

This creates a JAR file under the target directory.

At the time of writing, the sample application is at version 0.1.9, so the JAR file is called target/randomquotes.0.1.9.jar.

To deploy the web app, run the following command, replacing the name of the project to match your environment:

Your compiled application is then deployed. The deployment logs return a URL like https://[projectname].uc.r.appspot.com/ to the live service, which you can open in a web browser:

A common deployment pattern is to have feature branches deployed side by side with the mainline branch. To simulate this, deploy the blueheader branch of your web app, which changes the background color of the banner to blue.

The app.yaml file for this branch looks like this:

I've given this service a new name to match the name of the feature branch. I have also defined the SERVER_SERVLET_CONTEXT_PATH environment variable, setting it to /blueheader. This defines the context path that the web app expects to receive traffic from. This allows you to test some traffic routing rules that means you can access the new service from a URL like https://[projectname].uc.r.appspot.com/blueheader (as opposed to the unique service URL of https://blueheader-dot-[projectname].uc.r.appspot.com).

To route the subdirectory of blueheader to the new service, create a file called displatch.yaml with the following content. These dispatch rules define how traffic is routed from a URL to a service:

This is deployed with the command:

You can now open the feature branch at the URL https://[projectname].uc.r.appspot.com/blueheader:

Let's now look at how you can use traffic splitting to implement canary and blue/green deployments.

For this, you need to bump the version of the application in the pom.xml file to 0.1.10:

The app is then repackaged with the command:

The new version is deployed with the command:

The --no-promote option ensures this new version does not receive any traffic, so opening https://[projectname].uc.r.appspot.com/ will still display the previous version of the web app.

In the Versions tab, there's a button called SPLIT TRAFFIC:

Clicking this button allows you to direct traffic between the service versions. In the screenshot below you can see that the traffic has been split 50/50 between the latest two versions. You have split the traffic randomly, as this allows you to refresh the URL and see the two versions. However, if you were performing a production canary deployment, it's likely that you would direct users to the same version based on a cookie or IP address so each request didn't get routed to a random version:

A canary deployment is achieved by gradually increasing the traffic to the new version of the service. A blue/green deployment simply switches traffic 100% to the new version after any tests are completed. You can test a specific version outside of any traffic splitting rules using a URL like https://[version]-dot-[projectname].uc.r.appspot.com/.

In this blog post I deployed a simple Java web application, and demonstrated how advanced deployment patterns can be performed.